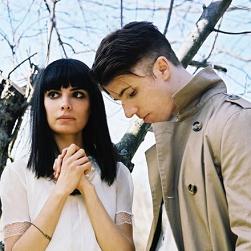 At one point near the end of School Of Seven Bells’ main set, one heckler asks a rather straight and to the point question, if somewhat mean and sarcastic in its delivery. “Where is Alejandra Deheza’s sister?” they enquire. Benjamin Curtis mutters a mere “Some people” in response.

A lot has changed since the band was last in London. For starters, what was a trio is now a duo. Alejandra’s twin sister, Claudia, left the band in October due to ‘personal reasons’. Despite this, School Of Seven Bells’ tour has continued apace in support of recent album Disconnect From Desire. Inevitably the dynamics of their live show have now changed. In Claudia’s absence the beats are now largely propelled by their live drummer (although Curtis adds some beats wherever possible). It also means the majority of the vocals, once a combination of luscious harmonies, come from Alejandra and she now becomes the outright frontwoman. All eyes in the crowd are focused on her.

For the most part she succeeds at this new-found role. The events of recent weeks have not taken their toll and she clearly doesn’t feel jaded (a lot of smiles are exchanged between her and her band members throughout). Without having her sister to back up her gorgeous harmonies, it does, on occasion, feel like she’s trying to work extra hard to get her voice heard above the wilderness of noise that her and Curtis’s guitars create. As such, some songs don’t scale the heights that they should. At other points, though, they are simply sublime. Bye Bye Bye and Dust Devil put her vocals firmly in the spotlight, and she rises to the challenge with confidence and conviction.

The same mix between euphoric and underwhelming applies with the overall performance, such are the consequences of their current set up. Their older material just about remains as epic and fail-proof as ever, yet some of their newer material does suffer slightly. Whilst Windstorm isn’t as dreamy and skyscraping as it is on record, My Cabal ends the main set on a wonderful high note of swirling guitars. As admirable as it is for the band to continue touring and figure out a new way of playing despite being a member down, the nagging feeling is that an extra person is still needed so that they can add more weight to their sound.

That said, everyone leaves happy after an encore of Sempiternal/Amaranth that has the power of an iron fist and more than makes up for any niggles from earlier. There are certainly flashes of brilliance that light up this dark, cave-like venue in the capital’s south. They should be commended for not letting their fans down and delivering at the very least a satisfactory performance that was worth travelling in the late autumn chill for. However, there also needs to be a re-evaluation of what School Of Seven Bells is as a live band, which will no doubt happen after their tour concludes.