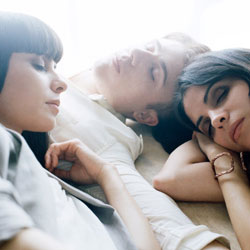 Sometimes a band doesn’t have to resort to gimmicks to make its musical point. Take School Of Seven Bells, for instance. There is a complete lack of posturing in the way they play, and almost no banter between them and the audience in between songs, other than a polite ‘thank you’ from Alejanra Deheza.

“It’s great to be back here!” she proclaims with a heartfelt tone, but then spoils it somewhat by forgetting when it was the band were last in the Scala. It matters not, for it’s the thought that counts – and plenty of that has gone into the set order, lighting and atmospherics, creating a trance-like atmosphere for the audience.

This serves to concentrate the mind on the music, accompanied as it is by subtle changes of light and a frisson of smoke here and there. SVIIB, as they also like to be known, begin many of their tracks with floated white noise and ambient distortion, which then leads to a hi hat that sets the tempo. The feeling is akin to flying through thick clouds before bursting into a glorious light, which is usually the point at which the drum beats drop.

Ex-Secret Machines guitarist Benjamin Curtis masterminds the performance from centre stage, but his is a modest contribution, leaving the Deheza twins as both focal and vocal points. Their harmonies are breathtakingly beautiful at times, singing at close proximity but rarely in unison. Just occasionally their sound is troubled by over-zealous feedback, and they could also do with a bit of extra volume to fully project. When the overall volume drops, however, the audience help out by keeping backchat to a minimum, captivated as they are by the relative musical statues on stage.

The band kick off with the beautifully woven harmonies of Half Asleep, and move straight into Windstorm, daringly dispatching two of their big guns early on. This allows us to figuratively kick back and enjoy new album treasures I L U and Bye Bye Bye, while later on the subtly powerful My Cabal strikes a chord.

Throughout Claudia, the keyboard-playing half of the vocal partnership, barely moves or looks up, but her interaction with the music is still clear to see. Likewise the near-stationary Curtis shakes his fringe now and then, a picture of studied concentration as he spins those magical guitar lines. ‘Shoegaze’ is the word we should be using to describe all this, of course, but it’s a modern take on the form that works particularly well tonight – certainly not a case of style over substance, as some critics would have you believe.

Gig, venue and weather are almost perfectly matched, the humid London night proving the ideal setting for the trio’s similarly hazy music. Their spell remains long after they have left the stage.