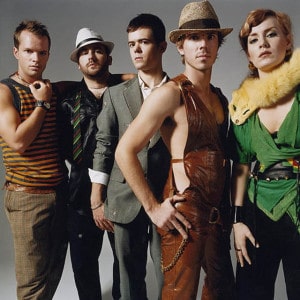 Flamboyancy, extreme temperatures and a, how shall we put it; a fairly camp ambiance can only mean that the Scissor Sisters are in town. Just another gig for them, and an amazing cabaret show for us. London’s packed Forum was melting as it awaited a band that are known for much more than just their music. Within seconds the lights blazed, as did the vibrancy and colours of the New York band.

Opening with Laura, from the off their energy radiated around the throbbing venue. Provocative disco singles were thrown out, almost like a real life jukebox. We were treated to Tits On The Radio, Take Your Mama and Filthy/Gorgeous amongst other brilliantly performed masterpieces.

Outrageous but still accessible, Scissor Sisters have enough charisma to attract a wide audience but still retain some integrity. Even those that claim not to be fond of cheesy throw away pop could not dismiss it when it’s this good. From your little sister to that lemon-faced indie-boy cousin, you could take almost any family member to see these guys and they’d all have fun. Mum would like Shears’ dancing, Dad would appreciate Ms Matronic and Uncle Harry would be after his own glittery purple cat suit as soon as he could find one.

Jake Shears, in his trademark ridiculously tight leather trousers, was on his best behaviour tonight as his parents were at this exclusive V Festival warm-up gig, as were celebrities such as Will Young (sporting a nice hat, but even he had to roll up his jeans in the heat and started to look moody when he wasn’t served immediately at the packed and sweaty bar) and Rachel Stevens.

This didn’t stop the dynamic Ana Matronic from yelling out some fairly offensive swear words between every song. Such a feminine image of a beautiful floaty dress seems to somewhat contrast with her language, but it seems their theme is to take things as we know them and rip them apart. There is not one stereotype they try to fit, preferring to live by their own rules instead.

With songs so catchy it would even make the most cynical of people tap toes. Movement, combined with the venue’s ever hotter sauna effect, reached a sweltering peak as the Scissor Sisters left the stage with a giant emu and an enormous purple Monster Munch type creature. Not only had we witnessed an entertaining performance, but we probably all lost a few pounds, too.