by Bekki Bemrose
published: 25 May 2018 in Live Music Reviews
Tweet 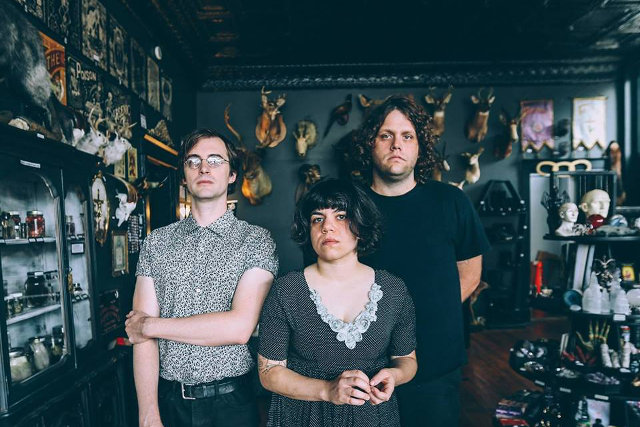 For years now people have been proclaiming the ‘Death of Rock’, and the grisly demise of the guitar as the righteous weapon of pop culture, with great hubris. While the six-string is doubtless no longer the dominating symbol it once was, you only have to look to a band like Screaming Females to be assured of its continued relevance and worth.

Earlier this year the band released their sixth record All At Once, which happily and defiantly rates as one of their very best; that coupled with their venerable back catalogue, and deserved reputation for incendiary live shows, ensures Hackney’s Oslo is rightly rammed for the New Jersey trio who treat the crowd to a nigh-on career-spanning set.

They dive straight into Black Moon from their latest to open the show, and it’s a shot in the arm of unadulterated Screaming Females’ brilliance. All to love about them is present from Marissa Paternoster’s indomitable vocal and lithe guitar to the punchy percussion and skulking bass. It’s a breathless way to open the show and one that has the crowd energetically bobbing straight out of the traps. Although there’s a slew of headbanging across the enthusiastic crowd, their music is also inherently if somewhat surprisingly danceable, as the ripper I’ll Make You Sorry later confirms.

While Screaming Females can stand proud with many a heavy band, any act that rips your face off for an entire set is going to get tiresome, but their performance allows for so many textures. The heartsore Hopeless from 2015’s Rose Mountain offers the quietest moment of the evening, but far from the least affecting. Equally, Bird In Space steadies the tempo, but nonetheless soars and allows Paternoster a more vocally delicate moment. Similarly, Wishing Well provides one of the best singalong points of the evening, with the crowd joining her in the chorus – “I toss dimes in the wishing well / And I’m broke cause you took all of me / My tombstone on a grassy hill It’s a matter of fact, all my change goes to hell” – in a lovely instance of down-on-your-luck solidarity.

Throughout the set Paternoster validates her reputation as one of greatest guitarists around with genuinely jaw-dropping solos. It remains remarkable that such a huge voice and these burly guitar athletics are sourced from such a tiny frame, but make no mistake Paternoster’s talent is writ large. Her preternatural gifts could be more than most rhythm sections could hold, but Jarrett Dougherty and “King” Mike Abbate’s timekeeping and rhythmical character both anchor and drive these explosive songs. Dougherty drums with indefatigable power and precision, and Abbate sets himself somewhere between the passion and physicality of Krist Novoselic and Lou Barlow’s playing to thrilling effect.

Were their show merely a display of technical ability the evening would be a very flat one, but the fevered heart of these songs matches the rigour with which they are played. Their performance has little to no theatrics, and no need for them as they set forth with so much commitment and fervour. And all that intensity is in full bloom when they conclude the night with a ravenous Starving Dog, from 2009’s Power Move.

The only conceivable way the band could have improved the evening was if they’d had Moor Mother in tow for a rendition of the recent remix of End Of My Bloodline, but then that’s just being greedy. Screaming Females demonstrated they are a very special trio of musicians, and with that comes a reminder of how invigorating guitar music can be. You’ll be hard pushed to find a better rock band currently in operation.