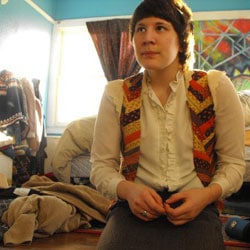 With her understated debut album Songs For The Ravens, Sea Of Bees (or Julie Ann Baenziger, for she is but one woman) released one of the year’s early joys. Packed full of tightly written, sensitive and personal pop songs, her music bridges the gap between Joanna Newsom and Tanya Donelly, which might not be the longest bridge in the world (Wikipedia assures that title belongs to China’s Danyang-Kunshan Grand Bridge), but it is a bridge worth crossing.

So here she is, a Californian playing the third of three tiny London gigs in the space of a few days at novel venues. An unintended pun indeed, but bearing in mind tonight’s venue is a library, the pun can stay. People scatter around the Westminster Reference Library, just behind Trafalgar Square, sitting on the floor, by the computer terminals, on the upstairs balcony, all eating ridiculously tasty cupcakes provided by promoters The Allotment. It’s an appropriately eccentric scene for our singer who, it turns out, is frankly bonkers.

Which isn’t exactly what you might expect if you’ve heard the album. The songs have a sad, awkward quality, but Baenziger is no wallflower. While she might class herself as shy, she’s not quiet and doesn’t stop chatting throughout her set. She mutters semi-comprehensively, letting us in to her life, including us in tales of her bad ass youth, her current love and other random musings that pop into her head between songs.

With just her and her superb accompaniment Amber, they strip back the arrangement of these songs, taking away some of the production values that you’d find on record. This simplification has pros and cons as ever, redacting out the percussion and the electronics, but making the whole experience purer and at times, such as on Strikefoot, heart-stoppingly intense.

It’s a short eight song setlist that includes the lovely indie-pop ballads Wizbot and Gnomes but leaves out other album highlights, including Willis and Won’t Be Long, replaced by non album tracks The Woods and Tantrum. Her voice, with her mouth lying right up against the microphone as she sings, is fragile and threatens to crack at times. But with Amber, together they ensure that they recreate the exquisite harmonising dynamic that is one of the album’s strengths.

Once we get to the gig’s conclusion, it’s virtually impossible to not have fallen head over heels in love with Sea Of Bees, statement pudding bowl haircut and all. As she dances around the stage and sings along to Beach House (played both before she comes on and as she leaves), it’s exciting to have seen a gig by someone doing this all with such talent, charm and purity.

Sea Of Bees MP3s or CDs

Sea Of Bees on Spotify