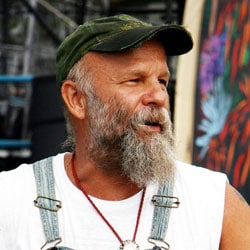 Howlin’ Wolf. Muddy Waters. Elmore James. They’d all be turning in their graves after a show like this: White guy export from the Delta plays the slide guitar blues for the enjoyment of thousands of excitable, white middle-class Brits.

From the salubrious environs of the Later… with Jools Holland studios and the GMTV sofa to the shelves of Tesco and, ultimately, stages such as Manchester’s Apollo, Seasick Steve‘s route to fame almost mimics the route of the manufactured pop star. For cynics, the prospect of tonight’s hobo love-in can feel just a little too cute and contrived for comfort.

This tired old point has, of course, been made countless times already. The music industry packages music the way we want it packaged. That’s just the way it is. Accept it or change the record. And besides, white guys have been touting the blues since the ’60s and Eminem hasn’t exactly done badly for himself, commandeering hip hop and blending a white man’s take on irony into a previously gangster-biased, irony-free mix.

Seasick Steve’s methodology is similarly cute. By offsetting the sweat-soaked traditions of the Delta blues with flourishes of boogie, skiffle and country, Steve Wold caters for Middle England’s taste for musical exploration that falls short of outright historical devotion. (Mention Albert King in this theatre and it’d probably start debates about wrongdoing footballers.)

Famously, UK music-lovers have also acquired a taste for charming personalities. And while Wold’s close-to-three hour set (two parts split by a short interval) isn’t at all bereft of musical substance, it’s his warm, hobo-charm (if not hobo-chic) that probably makes Wold Middle-England palatable. Certainly he wins over this completely sold out theatre. Proving that the stuff in-between is probably as important as the music, Wold regales the crowd with tales of his mixed-up childhood, his problems with whisky (and red wine on tonight’s evidence) and the American “chigger-mite” scourge with the kind of gruff charm that dissolves the distance between Manchester and Mississippi in seconds.

The night also sees Wold embark on a number of friendly verbal shenanigans with his playful, verging on football terrace-esque audience. Again, it’s all part of the package. Some might be left skeptically stroking their collective chin at the pre-ordained theatricality of it all, but the vast majority here would be more likely to cheekily pull on Wold’s beard and run and hide, such is the mischievous and lighthearted mood.

When he’s not chatting about “moobs” with his adoring public, Seasick Steve performs his rambunctious blues mishmash with the usual, vivifying gusto. New album Man From Another Time’s most raucous tracks – Diddley Bo, That’s All and Seasick Boogie – fill the theatre with the humid electricity of the Mississippi Delta and encourage a glad-handed, hip-shaking response from an audience comprised of all ages, from the younger-than-Steve’s-son young to the older-than-Steve old.

Aside from all the verbal freewheelin’ and musical foot-stompin’, Seasick Steve’s intimate forays happen to be the night’s most engaging pit stops. The tender Walkin’ Man, as it usually does, doubles as a serenade for a lucky audience member (cue seedy Coen Brothers-style Santa’s grotto connotations). But it’s the new album’s main points of reflection – the elegiac yearnings of The Banjo Song and Dark’s haunting, life-learned musings – that remind this audience that while their appreciation for the man’s hobo-blues is really still in its infancy, Wold at nearly 70 is looking at the twilight.

The night ends with a gloriously protracted version of Dog House Boogie and the crowd is encouraged to howl along, Smokestack Lighnin’-style. Whether Seasick Steve is considered a natural by-product or a crafty profiteer, there’s little doubt that a night like tonight would, after all, have had Howlin’ Wolf and the rest of the blues fraternity smilin’ and dancin’ along.