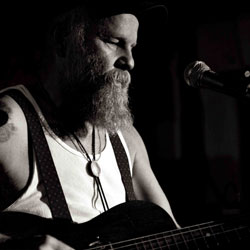 If you’ve lately returned from Saturn you might not yet have heard of the force of nature that is Seasick Steve.

The sometime hobo, furnished with an berbeard, wifebeater vest and a selection of “customised” instruments featuring such materials as cans of sweetcorn and bike parts, has been telling everyone who’ll listen that he’s lived a life, y’all, and he has some songs to sing about it too.

Suddenly this least likely of popstars is headlining the ornate Royal Albert Hall, venue of Last Night Of The Proms and alcohol restrictions, and he can’t believe they let him in, let alone onto the stage.

But there he is, mooching on with a guitar and twanging his way through a version of Amazing Grace that would’ve befitted the soundtrack of Brokeback Mountain, two voluminous Nashville divas gospelling their way through the lyrics with him.

Behind him is a packshot of his third album I Started Out With Nothin’ And I Still Got Most Of It Left, his first for a major label. His beardy, becapped head dominates in larger-than-life fashion. It fits the notion of this romanticised roamer with his self-perpetuated legend.

Odd then that his stage position isn’t out front of the band, but within it – where one might expect to find a session musician. The record’s title track is soon aired; joining him on stage is a drummer who for all the world reminds of the nervy scientist from Independence Day. His head jerks about and long tresses of grey hair flap in spectacular fashion as Steve gurns and hoots at his audience.

Steve plays the title track of his first album Cheap third and still hasn’t directly addressed the sold-out venue. “I ain’t talkin yet,” he mumbles, and with four words has the audience eating out of his hand.

At the close of St Louis Slim he suddenly seems to relax and ambles to the lip of the stage, as if inspecting goods. “I needs a girl,” he rumbles, to giddy giggles from the rows of females being surveyed.

Selecting one, he welcomes her on to the stage and sings Walking Man by means of introduction, the chorus of which involves the line “My name’s Steve” repeated over and over again. You know what? She probably knows. Nonetheless she does a dutiful job of sitting on stage and gazing demurely into his world-weary eyes as he whispers sweet nothings and twangs his strings.

He thumps his heart meaningfully as he expresses his gratitude to the audience for showing up; there’s a part of Steve’s mind that still can’t quite believe how big he’s become after so long in the wilderness. It’s an obvious though touching request for applause and his audience are delighted to bestow some.

Later he swaps his perfectly serviceable guitar for something called a “Diddly bow” which comprises a single string and can o’ corn. He slides and plucks and bashes it, eventually thumping it on the stage and dislodging the foodstuffs. Corn-fed rock’n’roll.

For his next trick he turns all Graham Norton and attempts to phone a friend from the stage in front of the live audience, but he can’t get the phone to work. A member of the audience does her best to help him out with this new fangled technology, but the phone’s not playing ball.

Never mind; like all the best magicians, he has more tricks up his sleeve. Next he sings an ode to a long-dead dog and decides to take advantage of his wireless guitar’s abilities by going walkabout around the venue. Cameraphones snap away at his every move as he sings a capella and encourages his thousands of backing vocalists to join in.

From then there’s no stopping them as ever more outlandish interjections are brayed from the various tiers. “He’s not Steve, he’s a very naughty boy!” howls one, paraphrasing Life Of Brian to bewildering effect. More a capella moments follow, at times his voice so low that it can barely be heard. He brings it all back to the stage and whispers at his backing singers, who visibly struggle to make him out… so he goes closer, and closer until – SMOOCH! – he plants a kiss on a cheek. More giggles.

Just Like A King comes and goes without the album duet with Nick Cave, but Steve is beyond needing celebrity help. The man owns the place and even finds a place for his youngest son in his band.

During another interlude, heckles are half-heard. “Who said they were bored?” he asks, picking up a baseball bat to titters and hoots. The furtive audience momentarily stays in position but then a small guy saunters up to the stage to take him on. How will Steve handle the brazen cheek? “I’m always ready,” he says, pawing his baseball bat meaningfully… and then, at the last moment, he hugs his challenger, to the delight of all.

Thunderbird wouldn’t be complete without a swig of the stuff, even if the massed ranks of dry audience sat before him aren’t permitted such luxuries by the venue. And then he heralds an early Christmas with Xmas Prison Song, telling us about the five years he spent “inside” during the festive season, perpetuating further his tale of down-and-out come good.

Chiggers comes with an explanatory introduction about the eponymous “nasty little bugs” and the reason why one should wear “socks up to my knees” in the South. It all sounds flesh-crawlingly foul, but the tune is the second best of the night; well over 90 minutes after he first mooched onto the stage he’s done. His audience aren’t, of course.

The encore, predictably, consists solely of Doghouse Blues, the song he played on Later With Jools Holland that caused his star to rise in meteoric fashion. He weaves in his tale of leaving home, of being beaten up by his stepdad, who threw him through a window – “You’s prob’ly all heard this story,” he says, and sizeable numbers of us have, but Steve’s talent for yarnspin makes it like a familiar bedtime story that only improves with retelling.

It’s close to curfew, but Steve doesn’t give a damn as he embarks on a mission to shake seemingly every hand in the house, disappearing momentarily down aisles before re-emerging to be gladhanded by young boys, old men, nubile beauties and enthralled children alike. Not for Steve a security barrier and minder. He’s having far too much fun doing what he does to do what’s expected. Whether he can maintain the adulation with his particular brand of populist hobo-blues remains to be seen, but for now the success of tonight and this year for Seasick Steve couldn’t have happened to a nicer man.