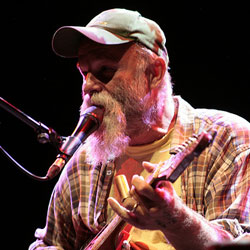 The old adage says that white men singing the blues is about as likely an event as flying pigs. The sheer strength and brilliance of Seasick Steve‘s blistering set for Richard Thompson‘s Meltdown Festival shows us that the skies may still be clear of pork, but the blues certainly knows no boundaries.

Seasick Steve kicked off the night’s performance by shaking the hand of everyone in the front row- no mean feat considering the size of the Royal Festival Hall. In fact, any doubts about the size of the venue dwarfing Steve’s brand of hobo-blues were quickly dispelled. From the beginning this was a wonderfully sincere and surprisingly intimate performance that might just as well have taken place in a stomping bourbon soaked roadhouse rather than the austere concrete of the South Bank.

The UK likes a bit of an underdog and the nation state has truly taken Seasick Steve to heart. He admitted to the crowd that he sometimes thinks that his sudden success after 50 years has all been a dream and that one day he’ll wake up, hungover under a bridge. It’s these moments of sincerity that highlight his genuine charm; there’s no arrogant star swagger, just a humble and highly talented musician who genuinely loves his audience.

He knows how to get everybody to enjoy themselves too. During the performance he easily made everyone join in (despite their Monday night blues) and even left the stage to sit playing in the stalls without missing a note. One particular moment involved him serenading a fan on stage with the wonderful Walking Man – turning something which could easily have been cheesy stage cliche into a genuinely touching moment.

The audience was treated to a rich spread of material – from his low-fi breakthrough album Dog House Blues to last year’s rocking Man From Another Time. The fascinating plethora of mostly home made ramshackle instruments made sure that roadies were kept just as busy as Steve and his drummer. Swigging away from a bottle of wine he looked in his element.

The night concluded with an epic rendition of Dog House Blues that playfully refused to end. Afterwards, the crowd poured into the night with aching thighs from foot stomping and hands red raw from all the applause. Steve himself stayed behind to meet and greet fans instead of jumping on the first boxcar out of Charing Cross; there’s no better illustration of the warmth and generosity of his performance. Performers a third of his age would have had trouble keeping up, but Seasick Steve made it look a simple as falling off a rock.