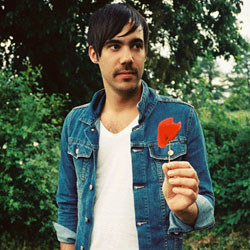 Sebastien Grainger has Mountains. We’re lucky that they’re large and conceited, so we don’t confuse them with Shakira’s breasts.

The subtext to all of this frequently seems to become the text when talking about Grainger, so we won’t spend too long boring over it.

Suffice to say, Sebastien used to be the drumming/singing portion of Death From Above 1979, with Jesse F Keeler (bass/other bits). They split in 2006, Keeler went off to do MSTRKRFT, delighting warehouses with his ability to both drink bottles of Jack Daniels and produce filthy electro beats, while Grainger kept his head relatively low.

But now he’s back. With added Mountains. And it isn’t quite like it was. Gone are the harsher metallic edges of a former life spent with the proboscis of a pachyderm, to be replaced with both melody and some additional band members – three in total – who help produce something wonderfully thrilling.

Thrilling in a gleeful, unreconstructed, unashamed rock ‘n’ roll way. Although you’d have struggled to guess it gazing upon an audience who seemed happy enough to huddle around the pink-hatted Grainger, but not quite enthralled enough to move. But forget that: Sebastien and his band spanked and posed and rollicked their way through an hour-or-so’s worth of material from his new record with a vim and vigour belying the surroundings.

Sometimes something is so friggin’ exhilarating it makes you giggle in a slightly inappropriate fashion. This was one of those times.

If you’re desperate to be brought crashing down to earth with some cold, hard facts, yes, this isn’t anything which hasn’t been done before. But in the delivery it becomes something great, and to see Grainger scream his way through Love Can Be So Mean, Who Do We Care For? and I Hate My Friends while his band combust across the stage is pretty much as joyous and as exciting as music can get.