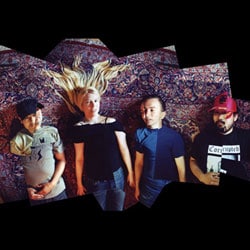 Seefeel achieved fame in the early ’90s with a debut album of loop-based ambient music that turned indie kids on to techno. Now releasing their first album in 14 years with two of their four members swapped for new musicians, they sound altogether more spikey and harsh. Taking the stage with the minimum of fuss, Seefeel immediately start producing the kind of grating electronic noise that makes the uninitiated wonder if there’s something wrong with the equipment.

It’s not a malfunction, of course. And indeed this makes a statement that Seefeel are not here to revive the My Bloody Valentine-era shoegaze that characterised their early career. Seefeel were a band seduced by loops and synthesisers, but on signing to Warp their sound took on a sharper, harder edge. Today they sound a lot like fellow Warp stalwarts Autechre in their use of distorted electronics to create a jarring, metallic performance.

Key to the noise is Shigeru Ishihara – otherwise known as DJ Scotch Egg – the band’s new bassist and a renowned noise maker in his own right. Playing through a rack of what must be industrial-strength effects pedals, he produces a painful screech of a performance. The other musicians join in too, but for this first section it is the harsh digital distortion that leads the way. It’s a jarring intro, no doubt chosen deliberately, and painful for those who half-expected to be welcomed gradually into folds of Seefeel’s many-layered sound.

On either side of Ishihara are founding members Mark Clifford and Sarah Peacock, each alternating between electric guitar and synthesizers. Clifford also peers into a laptop and Peacock periodically takes to the microphone to sing in a deep, breathy voice – far too quiet for any lyrics to be audible. Her singing is pleasantly soft and mysterious, and a complement to the cold urgency of the electronic rhythms.

There are some technical issues that could be solved. Ishihara’s bass sound is no doubt intended to veer towards harshness, but at times it seemed to unbalance the band. The musicians may have realised this – as the show continued the bass seemed to get less prominent, turning from sandpaper to roundness, and taking on an oscillating pulse reminiscent of dubstep.

Another issue is the drumming from second new member Iida Kazuhisa, formerly of Boredoms. Playing along to a drum machine is always challenging and on a couple of early tracks he is fractionally out of time. It’s a small error but one that’s hard to ignore. The difference between these and the later tunes, once the musicians have settled into a flow and the drumming is tighter, is marked.

In fairness to Seefeel, the show never feels like merely listening to a record, a common criticism of electronic performances. Even shows featuring live instruments can feel like the artists are enslaved to the metronome, adding little in the way of live buzz. This is not true of Seefeel, who feel very much in control and generate a genuine feeling of excitement, as though the show could at any moment take a surprise twist.

And in fact the show does provide excitement and surprise. Not in the performers’ actions – in the main they are static, preoccupied – but in the music itself. Loops disintegrate before one’s ears, transcended by piercing synth arpeggios that seem to shoot overhead like lasers. Metallic rhythms build and transform, and a cold, electronic veneer suddenly reveals something approaching human warmth – a strangely majestic experience.

The band finish with their best material and leave the stage almost immediately. There is no encore, disappointing those who felt the set only really came alive near the end. But as a band who kept listeners waiting 14 years for a new album, Seefeel know something about keeping their fans wanting more.