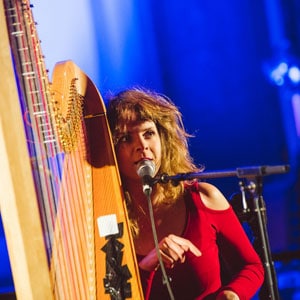 For the official launch of her third album, the Jarvis Cocker-produced The Moths Are Real, batty and glorious multi-instrumentalist Serafina Steer has returned to the room where a large part of her record was made – St Leonard’s Church in Shoreditch. It’s a grand 18th century building with fluted colonnades and a high, arched ceiling; it’s also somewhat shabby, with peeling walls and flaking plaster. There’s a sense of something magnificent and majestic that has fallen to neglect – it’s beautiful with bags of character, but it’s also sad. There can be few more appropriate places to appreciate Steer’s marvellous, delicate songs.

Steer sits with her harp – and there’s nothing that gives focus to a stage like a girl with a full-sized harp- as the centre of the evening. Her band spreads out around her – percussion to the rear, strings to the left, voices to the right, piano in front, weird bleepy-bloopy sound man, er, slightly to the left. She’s at the very heart of the sound and her cut-glass, none-more-English vocal fills every nook and cranny of the building. She wears the room like a fur coat.

When she sings about the “Cathedral of my mind” on The Removal Man, the most brilliantly odd moment of tonight’s show, it’s a short mental leap to realise that’s exactly where we are – this shabby church, with its faded grandeur filled with this beautifully odd sound, classical instruments, casio keyboards and laptops and at the rear, Jarvis flippin Cocker with his leg cocked just-so as he turns the handle of a barrel shaped instrument like a man at the church tombala. This is the cathedral of her mind; we are inside Steer’s vision of what her music should be. She knows it too; there’s a smile that never quite leaves her face tonight, no matter how lost she is in the sad, pastoral folk that starts at her harp and works outwards.

The new record forms the backbone of tonight’s set, moving from the delicate Night Before Mutiny to the skittish, tongue twisting of Skinny Dipping. There’s more wit here than the serious surroundings and the worthier-than-thou instrumentation would suggest; Steer is a courteous host and cracks jokes sweetly between songs, but the wit is there in the songs anyway. “I don’t know why I’m heading to Brick Lane, I hate it there like everybody” she sings on The Ballad of Brick Lane, referencing a street a 10 minute walk from where she sits – another example of how perfectly set up this show is – and The Removal Man talks of arse-slapping while Cocker’s unmistakable dry baritone rounds out the chorus. The musical palette has more to offer than dreamy harp-led folk as well. Disco Compilation echoes its theme in a bona fide rave up, all housey piano chords and open-and-close high hats, while Island Odyssey’s uses of recorders and medieval instruments deliberately skirts the edge of ridiculous.

Atmospheric, magnificent and, despite the endless Joanna Newsom comparisons, probably quite unique, Serafina Steer has set up the perfect showcase for her songs, and it’s rare that form and content match each other so well. If only church was always this spellbinding, or this beautiful.