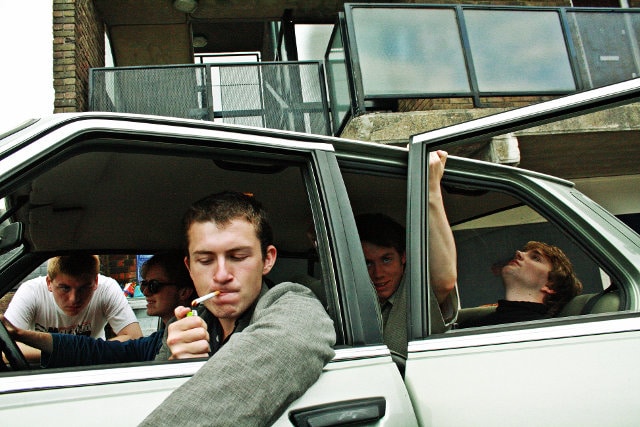 With their tightly coiled debut album Songs Of Praise at last released – to universal rave reviews, not least from this publication – and ahead of a US tour supporting fellow travellers Protomartyr, south London fivesome Shame are tonight headlining a sponsor-tied and particularly taut bill of talented young things at the 100 Club.

This awkwardly shaped basement on Oxford Street has legendarily hosted punks, post-punks and sundry assortments down the years, defying its capacity to survive the squeeze on London’s central live music venues along the way. Its confines provide scant chance to hide, but Shame’s constituent members are unlikely to seek hiding places. It’s immediately clear that venues of its size can’t contain them, even before magnetic singer Charlie Steen sets about his first crowdsurf during the squalling, incendiary opener Dust On Trial.

Since these eyes last saw them, in Paris in 2016, Shame have signed to Dead Oceans, and toured relentlessly. The band’s indebtedness to The Fall has been written sagely about elsewhere, but they also wear influences of other forebears. The anthemic Angie is the euphoric, hands-in-the-air equal of anything Oasis churned out in their pomp, while Steen’s visceral, in-your-face baritone roar – especially on the raw, infectious Tasteless, and spat contemptuously out in Concrete – recalls being up close and personal with an especially ragey Damon Albarn. Friction, meanwhile, looks northwards to Black Grape for its musical inspiration, while wearing articulate lyrics of social commentary laudably on its sleeve.

Well before Angie, Steen is sleeve-free. Barechested for the majority of the set, this ball of energy and conviction variously eyeballs and filthy-grins at punters, prowling the stage like a hungry panther and owning every inch of such space as it affords. Having shown his public the way, the rest of the gig sees boys and girls alike flailing over the heads of the rest of the audience, some making it to the stage, some booting the lights, some crashing to the ground. At one point a girl alights the crowd next to Steen and plonks a lipsticked kiss on his cheek; he sports a lopsided pink lippy imprint for the rest of the set.

There’s alas no space in this set for the Theresa May-bashing Visa Vulture, a live favourite written while the current Prime Minister was Home Secretary and which similarly failed to make the album. But of the 10 tracks which did make Songs Of Praise, only Donk is missing tonight. We do get muscular guitars tieing the decidedly unsubtle words of Gold Hole to their lascivious subject matter, and early single One Rizla’s embracing of insecurities, offering up self-deprecation and acceptance of one’s strengths in a positive declaration of intent. Both tracks sound energetic and fresh.

The album lasts for just 39 minutes, and this set scarcely seems longer, but they make every moment count. Ferocious guitar playing and a tightly drilled rhythm section give Steen’s powerful front man proposition all the support he could need, and the band members somehow avoid injury to themselves and their audience while flailing wildly across the stage. Yet while the intent of these songs is as unquestionably serious as it is real – Angie tells the tale of a young man hankering after a love who’d killed herself – there’s a knowing glint here that Shame is something more than the sum of its members, songs, lyrics, influences and look.

Shame are barely out of their teens and already they feel like they’ve outgrown tiny venues like this, even before their world-bestriding spring tour and selling out a date at the Electric Ballroom three months in advance. For this band, far larger spaces undoubtedly await, and with their flame burning so brightly you have to hope they’re keeping something back for tougher times. But right now, Shame are a thrilling live music experience, essential to witness and impossible not to cherish.