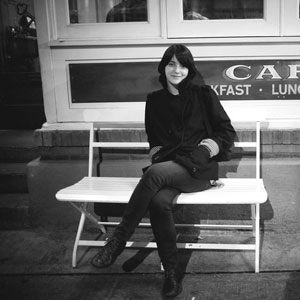 It’s very hard to completely silence a room full of people. Tonight at Cargo, Sharon Van Etten (and band) managed it repeatedly. They managed it whilst they were filling the gaps between songs with rambling tales of post soundcheck shopping exploits. Of the origins of nicknames. Of telling difference between underground train vibrations and feedback. And they managed it when they played. Especially when they played.

So whatever else you say about Van Etten, her ability to make a room stop and watch in hushed reverence is completely without question.

She has magnetism, charisma and charm. And those can get you a long way. Particularly when coupled with a voice that is warm yet vulnerable, sultry yet fragile, and songs that elegantly manage to be both nakedly personal and strangely universal. Given all that, it’s obvious how she can empty a room of distractions.

It’s been a good year for Van Etten. High profile patronage from the likes of Bon Iver and The National, a wonderful, almost universally feted third album (Tramp) in the bag, and as a consequence, she’s likely to find a bigger spotlight focussed on her.

The songs seem ready for it. The banter, perhaps, needs some work. The difference between the slightly unplanned, very un-practiced intra song chat and the beautifully delivered music was often fairly massive.

Magic Chords marched onwards, as graceful and as solemn as a New Orleans funeral parade. Give Out was heart meltingly stark, and a reminder that ‘acoustic confessionals’ isn’t necessarily meant as a critical mauling, while the ever-so-slightly country and just-a-tiny-bit western Kevin was simply lovely.

Just occasionally, you did get a hint that the band were still slightly coming to terms with how to deliver Van Etten’s intimate material. The harmonies on Serpents, one of the best tracks on Tramp, didn’t quite gel, and thus lost some of the vicious vitriolic heft.

Still, that was a minor blip. A small blot on an otherwise beautiful landscape. This was a performance that left the distinct impression that it won’t be the last room that Van Etten gets to pipe down over the next few months.