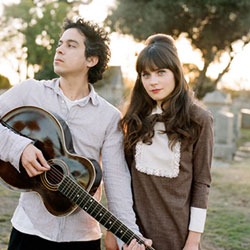 Before she had even released a record, Zooey Deschanel’s indie credentials were second to none, with an impressive CV of quirky, cult films under her belt. Her fans had already fallen in love with the character she repeatedly plays – the doe-eyed, floral-frocked girl next door – and it’s a part that she’s resurrected for her pop career.

Bursting on stage to I Was Made For You, she skips around the mic stand with her trademark fringe and bambi limbs, looking head to toe Summer Finn – her character in her latest indie-flick 500 Days Of Summer. A cynic could look upon the scene before them with suspicion so this, She & Him’s first UK show, is an important one that could seal their position as a credible band, rather than a backing group for an LA clich.

Deschanel’s musical marriage with nu-folk’s leading light, M Ward, has spawned two albums – 2008’s Volume One and the recently released Volume Two – both of which are infused with Ward’s dusty sound of yesteryear and Deschanel’s sparkly, charming vocals. Despite her obvious draw, she goes easy with the on-stage banter, and her drummer even starts beating in a new song as she’s talking at one point. But for the majority of the set it’s The Zooey Show, and Ward blends into the background with the rest of their band, a rabble of bearded muso-types. They give her an air of authenticity, even as she’s bombarded with declarations of love from young girls and considerably older men.

Both albums get a good innings, and highlights come courtesy of Black Hole, Sweet Darlin’, In The Sun and fan favourite Lingering Still, which sees Ward edge into the limelight, stalking the stage and clapping along. It sees them at their best, as they marry ’60s girl band harmonies, Beach Boys orchestration and a breezy country tinge to create a sound that gives them a wide appeal. The inflections in Deschanel’s voice emphasise their simple themes, which brighten up even their more forgettable album fillers.

In the second half of the set the pair take to the stage alone, armed with just Ward’s acoustic guitar, for a rendition of Brand New Shoes, a lynchpin of their second album. “I had got some brand new shoes, they were all red but they gave me the blues,” she pouts. They follow this with a cover of Smokey Robinson’s You Really Got A Hold On Me, their only full duet of the night. For those unacquainted with Ward’s solo work, it’s a brief introduction to his brilliantly gravelly baritone, which is given a Zooey-over as the pair exchange tender, lingering glances.

Their band joins them on stage again for another popular choice, Gonna Get Along Without You Now, which was first a hit in 1956, and again in 1964. It’s upbeat, sunny stuff, ably steered by Ward, but with Deschanel as the leader of the pack. She’s sultry, and spends the gig flirting with the entire crowd, but she’s completely unthreatening, and as soon as she veers towards sexy, cutes things up with whistles, twee hand-claps and little pogo-jumps.

The retro vibe continues with the encore, which sees Ward belt out Roll Over Beethoven, while Deschanel hammers the keys. Then comes the surprise of the night – her take on I Put A Spell On You. Rowdy from a night of singing and dancing-along, the song’s title is satisfactorily prophetic, and the opening notes silence the crowd. This is her moment to prove herself – her charming, girlish voice has been the star of the evening, but this final song is an entirely different story. She belts the big notes out, rocking backwards as she holds onto them so long she incites profanities from half the crowd. And then, with a couple of blown kisses and a wave from she, and a quick bow from him, they disappear off stage, with Deschanel having played one of her best parts yet.

She & Him on Spotify