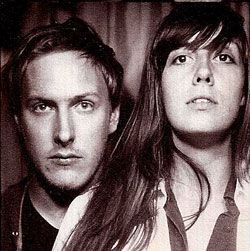 The Lexington has fast become a venue of some standing in London, booking many class acts, and it seems entirely right that She Keeps Bees, whose album Nests was one of the underappreciated gems of 2009, should play here on the London leg of their European tour.

It is also no surprise that two class acts are booked to support the Brooklyn duo on their sold out gig. Portland, Oregon’s Musee Mecanique are purveyors of delicately crafted soundscapes. They aim to be Grandaddy meets Sigur Rs, but their finest moments are their more straightforward songwriterly endeavours that recall Eliott Smith or Liam Frost.

Oh Ruin provide a slightly better realised support. A marvellous blues-folk fusion that is part Decemberists and part Mark Eitzel, with a fantastic vocalist and teasing little adornments of whimsy that give way to seriously meaty, enthralling tunes, all tied together by a charismatic yet modest frontman.

She Keeps Bees take to the stage to an enthusiastic reception, the too-cool-for-school slacker duo a study in nonchalance belying stage nerves. Jessica bangs her head on the microphone and mugs to the audience. The slight awkwardness gives way almost the second they start playing, as though they had been born on stage. Launching immediately in Recount, Jessica’s voice is a thing of ballsy wonder.

A sideswipe at Florence And The Machine is well received, but the apology for making fun smacks of someone without the courage of her convictions.

Despite apparent nervyness between songs, the patter is perhaps too fluid. If this is all studied it’s an amazing act; but the stand-up and earnest songs don’t sit well together tonight. The setlist is pretty much Nests, with a couple of new songs thrown in. But they are not a band to mix it up – about midway through the set one starts to wish for a cover, something to show if their influences go beyond Cat Power and themselves.

All too often, the relationship between the duo seems somewhat strained. Jessica dwells too long on a recent operation that Andy had in Germany, and how when he was ill, all he would ask for was some other woman. “All he ever goes on about is this woman,” Jessica proclaims exasperatedly; but all Jessica ever goes on about is Andy.

She Keeps Bees are not an act to be sniffed at, but something’s not quite right. Perhaps it’s their schedule, perhaps it’s their relationship, perhaps it’s the excitement of being in London, but the overall feeling tonight is of artifice. They seem to be trying too hard to keep it together, and although they succeed, the stress shows.

She Keeps Bees MP3s or CDs

She Keeps Bees on Spotify