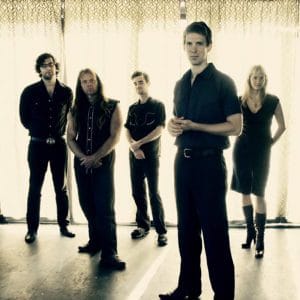 When they signed to Sub Pop, it wasn’t just Shearwater‘s record label that changed. Something had to give; another trilogy of albums about ornithology wasn’t going to cut it on Sub Pop, and their blurred epics didn’t feel like those of a Sub Pop band. So, while Animal Joy, the band’s seventh album, isn’t a huge departure from the nature-themed records of their back catalogue, there’s something a bit more confident, immediate and almost angry about it.

They’ve nudged towards a rockier sound, with more accessible melodies, many of which would sound at home on the radio – so Sub Pop could prove to be their awakening, a long-predicted shift into the spotlight – but none of it is at the expense of their core sound. The roots are still there.

Animal Joy was released back in February, and gets a good airing tonight. Frontman Jonathan Meiburg is on good form, making slightly awkward chatter with the crowd as he and his four band mates switch and change instruments. The absence of drummer Thor Harris doesn’t go unchecked. He’s tired of touring, we’re told, and while his austere beats provided much of the backbone to Animal Joy, pumping harder and more directly than before, his replacement matches him in sound if not intent.

As usual it’s Meiburg’s vocals that steal the show. The likeness to Talk Talk‘s Mark Hollis is impossible to ignore; strong and authoritative but with a velvety hum that throws atmosphere into songs in a way Hollis himself didn’t achieve. There’s an urgency to his voice, as he scrapes low notes and thrusts into taller ones, and he uses this as an instrument in itself.

One of the highlights of Animal Joy, You As You Were, is equally well received tonight. It starts off in typical soaring Shearwater fashion before an uncharacteristic driving piano brings it up. All the usual ingredients are there: the nature references, a spine tingling vocal performance from Meiburg, but there’s a marked difference in the mood. It’s as though they’ve broken through the fug, and are daring themselves to press the button marked ‘pop’. It gets the biggest cheer of the night.

Old favourites The Snow Leopard and Rooks, from their 2008 fifth album Rook, are lapped up too, as is Animal Joy’s Immaculate – a victorious, R.E.M.ish rock-out. It’s one of the fastest things they’ve recorded and ditches the otherworldliness of their earlier work in favour of an altogether more straight forward sound that, rather than sounding simpler actually reigns in a whole new, unexplored world of brilliantly contrasting, upbeat music against their usual, complex lyrics. They take this all a step further, choosing to end with R.E.M.’s These Days.

There will be people leaving tonight grumbling about Shearwater “selling out”, and they’ve certainly polished their sound and smoothed away some of the edges that endeared them to so many, but this new era of Shearwater is energised and exciting to watch. The band on stage at the Scala tonight have the spirit of a band on their first album, not their seventh.