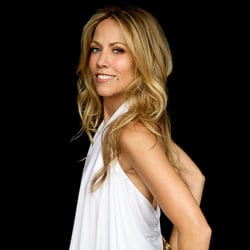 Tonight’s gig, very much a celebration of all that is warm, distorted and twangy, starts appropriately with the up and coming support act Clarkesville, who defy their Walsall roots by picking straight up from where The Lemonheads left off.

Frontman Michael Clarke’s voice invites inevitable comparisons with Evan Dando, particularly with the standout tracks Heavy Soul and Secret File. He clearly has plans for world domination – halfway through the set he enquires if the people from Sky Sports have turned up to hear his proposed theme song for their Euro 2004 coverage. He also invites everyone to have a drink with him after the gig – such enthusiasm has a certain charm, and he probably left the stage with a few more converts under his belt.

Sheryl Crow has always worn her heart on her sleeve, and the love of her life is undoubtedly country rock circa 1970. No alt-country for her, nothing so ironic as retro. Sheryl hangs out with the old rock greats – Keith Richards, Eric Clapton and Stevie Nicks – like they’re old school chums. And why not – she’s done much for keeping the American rock tradition alive by keeping it relevant in the dance-obsessed ’90s with some truly classic singles, all of which are to be enjoyed at this Greatest Hits gig.

The band enter stage right amid car engine noises and launch straight into Steve McQueen. Sheryl swaps her guitar for a bass and continues with There Goes The Neighborhood and more songs from The Globe Sessions and C’mon C’mon. The lost classic Leaving Las Vegas is a rare treat for older fans even if the new single, The First Cut Is the Deepest, is a somewhat uninspired choice of cover.

Everything is coasting along nicely until rock’s most affable veteran Stoner Ronnie Wood staggers in his own haphazard manner onstage, much to general delight. Avoiding the temptation to play a Stones number, they opt instead for If It Makes You Happy, on which Wood trades note bends and general amiability with the rest of the band.

From then on in it all steps up a gear. It cannot be denied that Sheryl’s second, self-titled album is her masterpiece and the singles from that – Every Day Is A Winding Road, Change Will Do You Good and Home (recreated in epic anthemic style tonight) form the latter, more frenzied, half of the set.

“You should see her from here!” Ronnie Wood comments approvingly to anyone who hadn’t noticed that Sheryl looks pretty hot tonight (if I look half as good at the ripe old age of 41 I’ll be frankly astounded). It’s the first encore and Wood has rejoined the band as they launch into a veritable jaunt through Bob Dylan‘s It Takes A Lot To Laugh. However, a blistering version of The Faces‘ (I Know) I’m Losing You ups the ante again, when Ronnie Wood justifies Sheryl’s esteem, as, fag in mouth, he leads the way with some great swaggering blues licks through his old band’s number.

The gig would have done well to end there, but a grand piano is wheeled onstage for a second encore with the rousing Safe And Sound, rounding off a gig which could hardly have been more of a treat for any Sheryl Crow fan – hearing her greatest hits in the intimate setting of Shepherd’s Bush Empire, loving every minute of it. They don’t come like that very often.