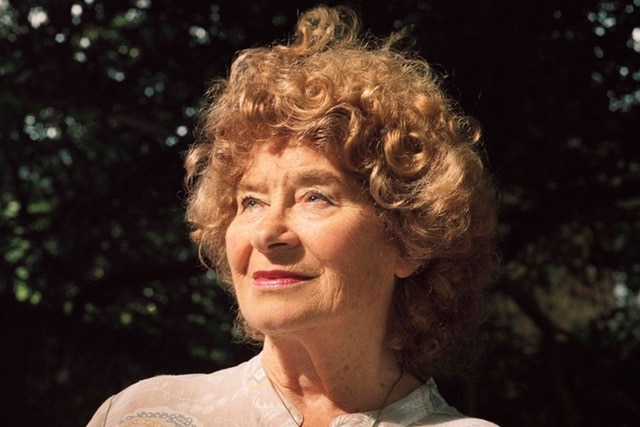 The last time Shirley Collins played the Roundhouse was in 1969. Decimalisation was on the horizon; also in the pipeline was a uniting of brothers and sisters known as the European Community Act. The rest of that particular episode is definitely not for this review, but for the wider duration of the UK’s membership of the community, Collins has been unable to sing. Having regained her voice from the clutches of dysphonia in 2014, it is ironic that her homeland should begin to lose its own with its immediate neighbours.

Now that her recovery is more complete, we can enjoy Collins’ gigs with increased peace of mind. In them we can also celebrate Englishness and nationalism in a wholly positive way, though as the first song Awake Awake notes almost immediately, ‘the dreadful days draw near’. This lyric in particular leaves a strong impact despite the plaintive strum of Ian Kearey’s mandolin. The song forms part of a four-strong medley with The Split Ash Tree, including a haunting and deeply moving hurdy gurdy solo from Ossian Brown. Five minutes in, and already the shadows are long in the Roundhouse.

Yet the darkness of the lyrics never overpowers the resolution of those delivering them. Collins sits in what looks like total contentment at the centre of her sextet, wearing a seraphic smile throughout that pulls the gaze of the crowd towards her. She is a natural raconteur but also an audience member herself, looking around for the appearance of Morris dancer Glen Redman, who duly appears to add striking footwork to Southover.

Collins’ voice is as she would want, low in range but a conduit for the bare bones of the folk material she sings. There are no histrionics, just a natural emotion bringing deep strength to what initially seems a plaintive sound. Her steady delivery of the lyrics wavers only once, and when she sings a more distant light twinkles in her eye, as though revisiting her previous appearance at the venue with Davy Graham.

“We played with Deep Purple,” she giggles, “and I’m not sure what the label made of us at all.” It is a statement typical of the modesty with which the gig progresses. She is ready, however, to introduce the rest of the sextet joining her onstage. Pete Cooper contributes a number of different instruments but his violin comes to the fore for Old Virginia and Hoe-Down, where Ruth Crawford Seeger is rightly credited ahead of Aaron Copland for the transcription of the original recording. He gives it a really enjoyable zip.

Ian Kearey leads us in the ‘world’s first postmodern cowboy song’, a cover of a Leadbelly original, before the much older Barbara Allen. An Awakening / Whitsun Dance soon follows, the lyrics written by Collins’ ex-husband Austin John Marshall. In it he chastises her for her lighthearted observations on women dancing alone in English Folk Dance and Song Society events, for they are all widows from the Second World War.

Despite the nicely judged contributions from band members this is indisputably Collins’ show. Her interpretations of Cruel Lincoln and The Rich Irish Lady are beautifully shaded, despite the dark and ultimately deadly lyrics. The former is punctuated by the ominous accompaniment of an organ pipe from Brown, while the ‘vengeful outcome’ of the latter leads us into a much perkier Kentucky fiddle tune, sweeping some of the darkness away.

The American-sourced material includes Pretty Polly, another excerpt from the 2016 album Lodestar – and one of many songs collected on her infamous trip of 1959 collecting American folk music with Alan Lomax. Death And The Lady is another, the woman in question meeting her end to Kearey’s immaculate slide guitar.

With Dave Arthur contributing a number of different percussive and melodic instruments, and Pip Brown the narrative hub for the evening, there is a pleasing feel of ‘an audience with’, where we have been invited into a private space with the singer.

Few gig experiences are likely to rival this, Collins turning the Roundhouse into her own front room, with a level of intimacy removing audience chatter and phone use. It is that sort of a night, commanding full attention, with no frills needed – just a lasting musical and emotional connection to England and its heritage. Our politicians could learn a thing or two from Shirley Collins, and her connection to the home land.