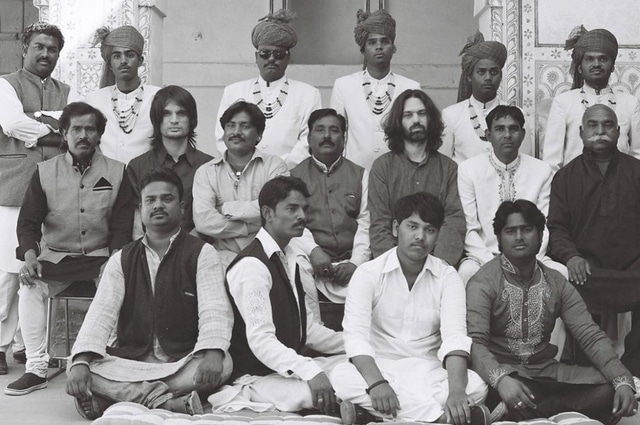 The collaboration between Israeli poet and musician Shye Ben Tzur, Radiohead’s Jonny Greenwood and the remarkable Indian ensemble The Rajasthan Express has produced an impressive volume of elevating, powerful music. Acclaimed director Paul Thomas Anderson brilliantly captured the spontaneity and joy of collective music making when he filmed the ensemble playing together at the 15th century Mehrangahr fort for his short film Junun (shown exclusively on the streaming service Mubi last year). This one-off concert at the Barbican provided a rare and welcome opportunity to see musicians from widely diverse backgrounds finding common ground in live performance.

The word ‘Junun’ may be translated in a number of slightly varying ways, one of which is ‘euphoria’, a remarkably accurate encapsulation of the feeling this music creates. Whilst the live show also highlights the awe, magic and immediacy on display in the film, it is also highly choreographed from the very outset. This can be seen first of all in the arrangement of the musicians on stage. Whilst the Rajasthan Express horn players (and Chugge Khan, their nominal frontman, playing traditional Rajasthani percussion) stand, the remaining members of the group sit cross-legged at the sides, facing inwards.

These include two nagara drummers, one dholak drummer and two vocalists, one also playing what looks like a form of accordion. Whilst it may be his name that has helped push this project to a much wider audience, Jonny Greenwood is emphatically not the bandleader here. He stays at the back, where a drummer might usually be situated, mostly playing bass (sometimes guitar) and quietly experimenting with an arsenal of effects and often well blended electronics. The frontman is singer and guitarist Shye Ben Tzur, who maintains an alert and poised presence at all times, directing the ensemble where necessary.

There’s a strong theatrical and performance element to proceedings, from the opening dramatic flourish provided by the three drummers from the Rajasthan Express to the entertaining interaction between Khan (who plays traditional castanets) and the audience. He engages the crowd in a spirited piece of call and response, which provides a necessary awakening for an audience that had seemed overly passive, particularly given the urgency and power of the music.

The show also emphasises the extent to which Junun is a coherent work, with infectious and joyous recurring melodic motifs and thematic development, accompanied by a varied set of Qawaali-inspired grooves. Ben Tzur also finds room for moments of curious reflection and melancholy such as Kalandar, which features him playing a traditional flute.

There are, however, a couple of moments of noticeable insecurity. Greenwood gamely saves one piece from becoming a train wreck by resetting the drum machine after a timing issue between the electronics and the ensemble. The powerful amplification also deprives some of the music of its space and depth, making the brass instruments and percussion more forceful and less blended presences.

Still, this can hardly undermine a strong overall impression of a transcendent, transformational music with a sense of unity and common ground. The closing run, including Roked, an insistent but subtle presence on the album but here rendered as a full bodied club piece, coaxes the audience from their seats. By the end, the experience feels as much ritual as it is performance, with band and audience integrated in a glorious celebration of music, sound and spiritual inspirations.