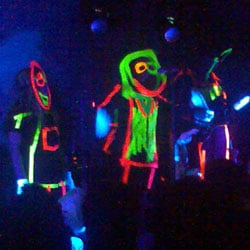 It was the end. The final scenes of Six Feet Under‘s fifth and final season were unreeling. Claire Fisher was driving into the sunset, the shot interspersed with the future deaths of the hit show’s central characters, meeting their maker one by one. Through it all was Sia‘s song Breathe Me, soundtracking the unforgettable moment and helping to unleash floods of tears.

The Australian’s UK profile beyond that one TV scene has been rather quiet outside of her collaborations with downtempo success story Zero 7, despite a smattering of chart singles and solo albums. But tonight in the carpeted, plastered opulence of Bush Hall Sia is in London to play for an audience with a good many of her countrymen to the fore. The lights go down and, hankies at the ready, we prepare to cry our eyes out. And then on came some neon-painted characters who danced about.

Suddenly we’re at a rave. Cameraphones rise in unison and snap away as the band, black neon-striped masks bobbing and nodding, blue hands jiving, get the set going. At the end of the first song, the lights revert to something more conventional, the black costumes are removed and there before us is Sia, who looks for all the world like a young Victoria Wood, a tidy blonde bob atop her frilly turquoise-green print dress.

The mid-tempo Buttons is an early standout, showcasing a voice that’s both more powerful and tuneful than expected. But the set soon becomes dominated by frequent pauses for all manner of natterings on the stage. The bassist’s 10-year-old daughter is wheeled on for a duet and wheeled off again. Various people are thanked for their support. Unfortunately she’s not quite in the Hafdis Huld league of stage banter, and the interminable pauses eventually serve only to detract from her music.

Between two such longwinded, if ultimately charming chatterings, Breathe Me is played, mid-set, and is just about lost, over before it’s started. The hankies are not needed. And then suddenly it’s time for a wrap-up. As seems customary at Bush Hall, there’s no going-off-coming-back-on moment. We’re asked to cheer for an encore with the band on stage. The audience oblige – Sia has, after all, been a charming host. But, despite another visitation into Zero 7’s catalogue for Distractions, a sense of disappointment remained.