by Ben Urdang
published: 27 May 2010 in Live Music Reviews
Tweet 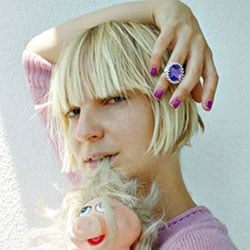 “She’s proper crazy – you’ll love it” is the general consensus on what to expect from a Sia Furler live show. It’s a consensus that probably comes as a surprise to most who haven’t seen her before. This is after all the woman whose main claims to fame have been as one of the resident vocalists for the successful, but crazy as a box of tissues trip-hop outfit Zero 7, and for soundtracking the deaths of the entire principal cast of Six Feet Under.

So it’s only the uninitiated who are surprised to find the Australian girlfriend to JD Samson in a dress made largely out of red and white stripy tape with a “head penis” fascinator (her description) affixed to her hair, shouting at the audience for not heckling enough. As someone finally responds with the “show us yer tits” call of the desperate, she swipes him away with a deft “Why? They just look like your mum’s”.

Her manifesto is to make her concerts a communal experience and she invites people to throw things at her (out of which she earns herself a sherbet dib-dab and a shower cap). Occasional five minute breaks in which she attempts to engage sometimes fall a little flat and there’s a strange dichotomy between that giggly Sia – the one who can’t control the grin that engulfs her face between songs – and the serious Sia who takes on an entirely different persona when singing. But in all she’s charming and gives of herself.

Of course she’s not actually here as a stand-up comic, but rather as a ridiculously talented singer. And tonight, for the only UK date of her European tour, she’s showcasing new album We Are Born, which has seen a shift away from the sweeping, emotive ballads of old towards more upbeat pop. She intersperses old with new to good effect, but there’s little doubt that it’s the huge songs from the past that do her voice justice. Because her voice is what it’s all about. Relevant adjectives might include powerful and effortless, jazzy and purring, and in person it’s really very special, particularly when singing the type of heart-tugging belters that would make Diane Warren pack up and go home.

With her first couple of albums and her work with Zero 7 being largely ignored, the setlist focuses almost entirely on We Are Born and previous album Some People Have Real Problems. Songs like Lentil or Breathe Me (the only track taken from an older album), which appears to be becoming her standard (thanks, dead Six Feet Under people), are greeted like old lovers by her faithful audience. Throwing in cover versions of Madonna‘s Oh Father and The Pretenders‘ I Go To Sleep mark out how much of a shame it is that she’s nowhere near the Ciccone or Hynde level of fame. It’s difficult to avoid thinking that she’s somehow, and unfairly, gone under the radar.

Furler has claimed to never have made money from album sales, and so has turned her hand to writing for others – four of her compositions will appear on Christina Aguilera‘s Bionic album. And so there’s an acknowledged risk that she might not make any more records herself. It would be a huge shame because that voice, and that, let’s say individualistic rather than crazy style and personality make her a spectacular star in her own right.