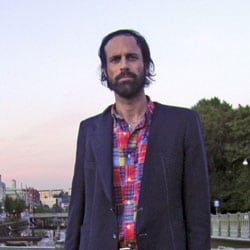 This current burst of activity is the Silver Jews‘ first tour in their 15-year history, which might give a clue as to why David Berman and his merry band are the poster boys (and girl) of the alt.slacker scene. For the cult following they’ve built up across six albums, however, it’s a case of better late than never, especially when the reward is the intimate Kings Cross Scala, holding just a few hundred faithful – none of whom are all that much further than arm’s length from the cramped stage.

Most of the loyal and expectant crowd got here early to secure their place at the front; appreciatively sitting through run-of-the-mill folkie warm-up Bobby Bare Jr and slowly getting more and more excited as roadies who look like escapees from a history seminar flit about the stage. Cassie Berman emerges to an appreciative cheer, tuning up her bass and blowing smoke into the semi-darkness with her back to the crowd.

And then, enter David and the band: he greets the crowd and launches into a storming rendition of ‘Random Rules’. Its lyrical statement ‘I was hospitalised for approaching perfection’ is something the audience will readily agree with: Southern gothic vocals, New York art rock guitars and words from a man who’s a published poet, all wrapped up an alt.country, alt.folk, alt.excellent package that’s more than worth the decade-and-a-half wait. He sounds like Nick Cave fronting the Velvet Underground, more than proving himself to doubters who may ever have accusing Silver Jews of being nothing more than Stephen Malkmus’s Pavement side project.

After all, while he’s not been touring, Berman (along with co-founder and on/off collaborator Stephen Malkmus) has had the chance to build up a fantastic collection of songs, and although his band haven’t had enough commercial success to claim that this is a greatest hits tour, it’s certainly a run-through of their best known and best-loved, from the brushed cymbals and bluesy country and western of Trains Across the Sea from debut album Starlite Walker, through the apocalyptic Slow Education, with its fabulous opener “When God was young/He made the sea and the sun”, to the deep and dark tales of midnight executions on Smith and Jones Forever.

From the crowd favourite Horseleg Swastikas to Handsome Family twisted humour of How to Rent a Room he’s on fantastic form; reading his lyrics from a notebook on a music stand (he apparently has trouble remembering them) just adds character to the performance. The interplay with wife and bassist Cassie works well, particularly on the songs where she shares or takes the bulk of the singing duties: they share a tender kiss before her country drawl launches into the self-knowing country pastiche/homage of Dallas.

It’s an impressive and exuberant set, packing what should be an illegal amount of classic, beautiful, poetic and darkly humorous country blues into barely an hour, giving us more than a dozen songs and closing with a reminder that just when you thought this was a good as it gets, it can get better: the brilliant There Is a Place from last year’s Tangleweed Numbers, which delivers such unforgettable lines as I Saw God’s Shadow on the World […] I took a hammer to it all”. Employed as the opener on some of the previous gigs, it’s used to great effect here as the closing number.

He’s had six albums from which to cherry pick tonight’s set list and he’s covered all bases, from Starlite Walker to Natural Bridge, American Water to Tangleweed Numbers. There’s no room for almost-hit Send In The Clouds, but then, you can’t have everything.

Of course, the crowd aren’t going to let him get away just yet. With an expression that indicates he’s genuinely touched by the enthusiasm of their clamouring for an encore, he’s back for Black and Brown Blues before finishing triumphantly on Punks In The Beerlight, with its heartfelt “I love you to the Max” echoed back by a crowd who mean every word as much as he does.

Good things come to those who wait. Let’s just pray it’s not as long until the next time.