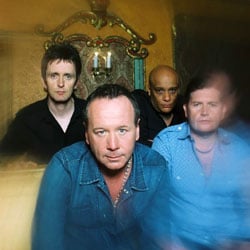 The aircraft hangar known as Wembley Arena tonight played host to a formerly high-flying act which, it turned out, is not yet grounded.

Simple Minds were huge from about the early ’80s to the mid-’90s, then went into nosedive. These days, even if they can’t fill stadiums any more, they can still play the arenas.

The appetite for ’80s nostalgia was to be whetted first by support act Orchestral Manoeuvres In The Dark. One of the first synth pop bands in this country, OMD’s music has not dated well. Still they managed to get the near-capacity, mainly middle-aged audience shuffling between the rows of seats.

OMD performed their considerable number of hits, including Joan Of Arc, Enola Gay and Locomotion, in an hour-long set. But apart from the New Wave urgency of first single Electricity the music sounded pedestrian and thin. However, singer and bass guitarist Andy McCluskey – in remarkably good shape for a man of his maturity – entertained the crowd with his dancing, like a puppet on an invisible string manipulated by a drunken puppet-master. “It wasn’t cool 30 years ago but I can still do it,” he said. He certainly can.

Many people will be surprised – even horrified – that Simple Minds are not only still performing live but actually still producing new music. But after their successful 30th anniversary tour in 2008, this year the biggest ever Scottish rock band have even made it back into the Top 10 for the first time since 1995 with their 15th studio album Graffiti Soul. Featuring some genuinely good songs in Sparkle In The Rain style, it’s a real return to form.

Of course although Simple Minds were massively popular around the world, their brand of epic stadium rock fell out of fashion long ago, and is reviled by many as bombastic and slick in the U2 mould. But less known is that they started out as an experimental electronic rock band, with their first four albums heavily influenced by the industrial krautrock sound of the likes of Kraftwerk.

Not surprisingly the two-hour gig featured no songs from this early uncommercial period, or indeed from their recent failed albums, but concentrated on songs from their glory days, plus just a few tracks from Graffiti Soul. The slightly earlier songs like Promised You A Miracle, Someone Somewhere In Summertime, Waterfront and Book Of Brilliant Things came across better than the over-inflated Sanctify Yourself, All the Things She Said, See The Lights and Don’t You Forget About Me from their pomp years. But the highlight was the atmospheric bass-driven Moscow Underground, the outstanding song from the new album.

Now 50, front man Jim Kerr may be thicker of waist and thinner of hair, and he may move awkwardly on stage these days, but his distinctive, powerful voice still easily fills an arena and he well knows how to handle a 10,000-strong crowd, orchestrating singalongs and handclapping with aplomb. Guitarist Charlie Burchill also looks his age but produced his big echoing guitar effects as if it was 20 years ago. The five-piece band were ably supported by a black female backing singer who at times made a soulful impact.

OMD briefly returned to the stage to jointly perform Kraftwerk’s Neon Lights (which both bands have covered separately before). Then Simple Minds returned for encores: the recent single Rockets, former big hits Alive And Kicking and Ghostdancing, and finally a version of the Van Morrison song Gloria, with Kerr pointing the microphone towards the crowd for them to sing. Judging by their reaction, Simple Minds are indeed very much still alive and kicking.