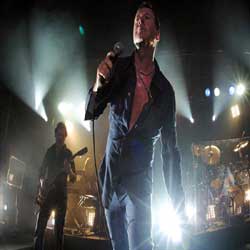 “Wings? They’re only the band The Beatles could have been!” Take this quotation from Alan Partridge and substitute the words “Simple Minds” and “U2” and a picture emerges of how the fates dealt with these ’80s rivals.

Around this time, the two entities were synonymous with overblown stadium rock, all big drums, harmonics and synthesisers (as keyboards were once known). Indeed, were they in a race, it would be difficult to tell who might win – U2 with their mulleted preacher up front or “Ver Minds” with their tubby Scot behind the mic. As the Berlin Wall crumbled, though, it was U2 who pipped it, having the imagination to clamber across and record Achtung Baby while Simple Minds crashed to the ground somewhere just outside Liepzig, virtually disappearing off the pop radar.

So with all these memories in the back of my mind, to be within touching distance (not that I would, you understand) of Jim Kerr and Charlie Burchill is somewhat, well, freaky. I’m sure U2 do the occasional gig to 200 fans in an old punk rock venue off Leicester Square – alright, maybe not, but to be this close to a band who recorded the Wembley-filling sounds of Alive And Kicking and Love Song (both given an airing tonight) is, simply, surreal.

For the crowd of lucky Capital Gold listeners, however, it’s as close to orgasmic as many of them can probably hope to get nowadays. The two enthusiastic fat blokes at the front, with a combined age of 100 if they were a day, even knew the words to the first few tracks from new album Black & White 050505 (which I believe was a clue in The Times crossword yesterday). And when Don’t You Forget About Me kicked in (almost a hit for Bryan Ferry, apparently, and the key to Simple Minds “overnight” success) their barely contained rapture burst out, prompting several not-so-young-anymore ladies to storm the stage for an opportunity to touch their hero.

One thing’s for sure, though – Jim Kerr hasn’t lost it. According to MC David Jensen, New Cross venue The Venue was chosen by Kerr for its “theatricality”, and he made the most of this with his trademark head movements, arm swinging and crouching down (you had to be there). In fact, it made me long for a time when singers in bands used to dance – whatever happened to them? On an equally positive note, the new material does compare favourably with the old – although nothing will ever beat the throb of Waterfront for me. And yet, at the same time, therein lies the problem.

You see, frankly, the reason they ran out of steam in the first place was that their material was never actually as good as their rivals’. A song such as Mandela Day (still in the set, it would seem) only serves to remind us that the ’80s were a long time ago and, actually, weren’t that much cop anyway. That said (and I’m sure Kerr and Burchill must say this to each other every day recently) – what are The Bravery doing today that Simple Minds didn’t do better 20 years ago? And for me, in many ways, that just about sums it up. And if they’ve still got it – well, let ’em flaunt it.