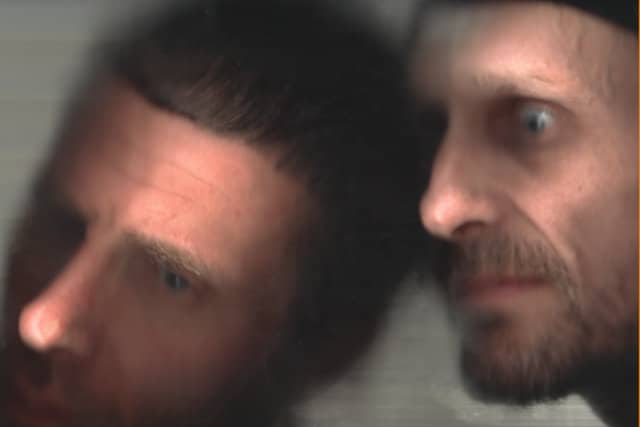 “So”, says Stewart Lee, “they’re not Mods and they’re not from Sleaford.” Cue the veil being lifted. Cue 4,000 people seeing the truth. 4,000 people peeking behind the curtain. 4,000 people staring in horror at the Emperor’s junk. Cue the beginning of the end. Well, ok, no. But it does raise a point. That Sleaford Mods name could well be the least honest thing about them. Because in many other ways, in a time when striving for and claiming authenticity is usually done by those with the least right to do so, Jason Williamson and Andrew Fearn have remained intensely, almost painfully, truthful.

That’s not in the sense of some great artistic truth, but in the sense of a band with a lack of pretence. An inability to sugar coat. An absence of any sort of pandering to the masses.  An unreasonable, angry and bitter band for unreasonable, angry and bitter times. Yet here we are at the Hammersmith Apollo, triumphantly concluding a year which has seen a new album (Eton Alive) and their largest tour, with a hand picked bill, at the largest venue they’ve ever played. Not bad for two guys, one laptop full’o’beats and whole metric fuck-tonne of polemic. And to think they’re not Mods and they’re not from Sleaford.

But first, Viagra Boys. They are boys, but they offer little information on the chemically induced engorgement of their members. More importantly, however, is the fact they are a grimy vision of seedy magnificence. Sunglassed (and topless before the opening Research Chemicals is complete) singer Sebastian Murphy is the howling dervish whirling at their core. The opener is part discordant parps of saxophone, part Batman theme tune bassline and part opportunity for their front man to roll about on the floor. Better is to come. Just Like You is almost poignant, as the squeals of saxophone turn haunting and the backline builds into more minimal spaces, where the ridiculous mad libs and brilliant surfy chorus of Sports is darkly, darkly hilarious.

Then, here come the Mods. Except, they aren’t Mods, are they. Set-up as they always are: Fearn, laptop on top of an upturned flight case, Williamson centre stage, gripping the mic stand. There are some light posts set up around them, they even occasionally change colour, but it’s unclear if this is a nod to stagecraft or just something to illuminate the expanse of the Hammersmith stage so they can find their way around.

They open with When You Come Up To Me and it’s as calm and as languid as things get. Eton Alive was an album which represented a bit of a wing-spreading moment for the band and that song, with Williamson’s machine-gunning invective becoming a genuinely affecting croon, was one of the more out-of-lane moments. They lean heavily on their last record. But while it may have offered a new view on Sleaford Mods, it’s hardly like it could have been made by anyone else. It’s still Fearn providing a pummelling arsenal of noise that put the beat in beats (but that also possess an oft overlooked deftness) and Williamson wryly taking aim, with vicious precision.

Subtraction is punishing. Top It Up is lithe and oily. Big Burt squelches past in super bassy fashion. Through them all Williamson is the twirling, knee raising conductor delivering his barbs with perfect timing and miraculous footwork. Be that Mcflurry’s sneering “I’ve got a Brit award / I’ve got a Brit award”, or Just Like We Do’s “Pretentious little twat on social medias” or the still impressively evocative “the smell of piss is so strong it smells like decent bacon” from Tied Up In Nottz, Williamson manages to both weaponise, and democratise, his despair.

And you know what, here, in this setting, the communal experience of sharing that despair is wildly entertaining. They blast through the encore. Kebab Spider, Jolly Fucker and O.B.C.T. dispatched with magnificent precision before Tweet Tweet Tweet concludes with Williamson raging “Nothing’s changed has it? / Fuck all’s changed, has it?”. In a global sense, no. It’s as bad as it was 90 minutes ago. But in a literal sense yes. Sleaford Mods have played Hammersmith Apollo. Except, they’re not Mods and they’re not from Sleaford.

Sleaford Mods played: When You Come up To Me McFlurry Fizzy Moptop TCR I Can Tell Flipside A Big Dream Second Bronx in a Six Tarantula Deadly Cargo Bang Someone Out Just Like We Do B.H.S. Subtraction Top It Up Big Burt Eton Alive Encore: Kebab Spider Jolly Fucker O.B.C.T Negative Script Tied Up in Nottz Discourse Jobseeker Tweet Tweet Tweet