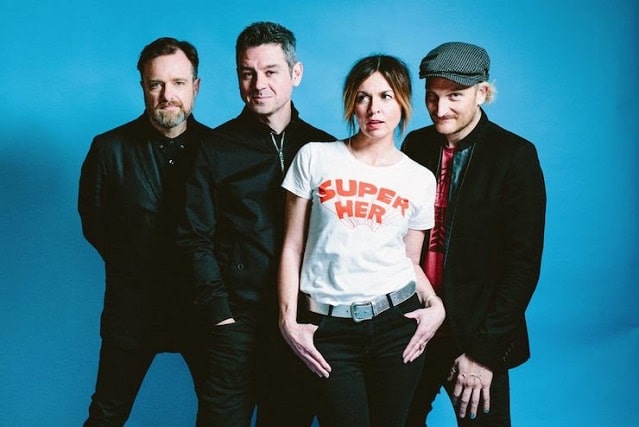 After what could be described as a long hibernation, Sleeper are now very much wide awake. The Britpop band – who had three Top 10 albums and eight Top 40 singles in the ’90s – re-formed to play some gigs in 2017–18, then released their first new album for over 21 years last month. The Modern Age is surprisingly strong for a band out of the loop for so long – not very different from their earlier material but with a slightly contemporary twist.

Sleeper were one of three high-profile female-fronted Britpop guitar bands (together with Justine Frischmann’s Elastica and Sonya Madan’s Echobelly) in a movement notorious for its laddishness. Front woman Louise Wener is not just a charismatic singer but the main songwriter, with a talent for penning wittily observant lyrics (so it was perhaps unsurprising that she went on to publish four novels and an autobiography after the band split up). Now she is reunited with lead guitarist Jon Stewart and drummer (and husband) Andy Maclure, plus new bassist Kieron Pepper (augmented by a session keyboardist and rhythm guitarist).

The last concert of a short tour to promote their new album is at the Forum – a sort of homecoming for Sleeper (who played their first London comeback gig at the same venue in 2017). The evening has an air of celebration with Wener several times saying how much it means to be back and the band clearly enjoying their renaissance in front of an adoring, mainly middle-aged crowd happy to dance, clap and sing along. Blonde-haired and dressed in black wearing a ‘Space Cowboy’ T-shirt, the sinuously swaying Wener is very much the focal point as always.

After an intro of Nancy Sinatra’s James Bond song You Only Live Twice – appropriate enough for a band enjoying a second coming – Sleeper perform an impressively sharp 75-minute set. The songs are pretty evenly divided between Smart, The It Girl and The Modern Age with nothing from the disappointing third album Pleased To Meet You (soon after which the band broke up). It may seem a bit strange that only half of the new album’s tracks are performed, but then again there’s not much doubt that it is the old hits that most people have come to hear – perhaps for the first time live in two decades.

Sleeper kick off with the chirpy old favourite Nice Guy Eddie, followed by the rampantly sexual Delicious. The more subtle, bittersweet What Do I Do Now? comes across well, while Lie Detector zips along nicely. The new songs hold their own amidst the back catalogue, especially the percussive The Modern Age and the catchy The Sun Also Rises.

Their spirited cover of Blondie’s Atomic (which featured in the original Trainspotting film) ingeniously incorporates a section of Joy Division’s Love Will Tear Us Apart, as the mirrored disco ball circulates shards of light around the packed venue. But it is the breakthrough single Inbetweener that gets the biggest response from the movers and shakers nearest the stage.

After a short pause, Sleeper return with three encores, starting with the new album’s lively lead single Look at You Now and finishing with the infectious Sale Of The Century as white confetti showers the crowd. There’s no question that the band’s delight in performing again is reciprocated. After a short nap, Sleeper will reawaken for the summer festivals.