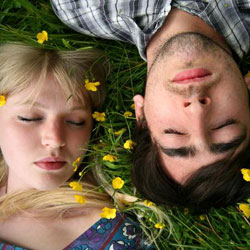 Oh, for a night in Cardiff Barfly. Oh for the variety (more Hitlerite than Peelian), oh for the left-alone underground feel. Oh for the illusion that we’re in a golden age of indie.

Of course, Barfly’s golden age is one of high street-sponsored domestication, where the kids come as glossy as the magazine pages they read. Thus the fare begins…

Amelia Duke have a good name, immediately evocative of two fine things, Amelia Fletcher from Heavenly and Talulah Gosh and the new Darren Hayman track Elizabeth Duke, but in actuality Amelia Duke are as far removed from these two things as possible, or, as one punter cannily suggests, “total shite”.

In fact, a band of such clichd proportions I’ve rarely seen; this is mainstream indie for the kids to break up and die to. There are so many positives in the modern pop underground, but you can’t help looking over the fence now and again.

Sheffield duo Slow Club are thankfully an altogether more positive “cool”, coming from the affectionate underground, dripping sultry Pop melodies and looks. Guitarist and co-vocalist Charles is in a Russian hat, throwing guitar rhythms like a humble loon, his partner Rebecca beside him under an overgrown lopsided fringe that would topple a small boat, hitting drums and a chair from that great standing position and singing with forthrightness and beauty.

They have one hit that kicks the ass of even the White Stripes, a country punk pop stomp of such splendid rhythms that the sentiments wouldn’t matter, except they’re great too. It’s as festive as Tilly and the Wall and as twee as a troupe of Panda Bears. They’re not afraid to let it go quiet too, which is great, a quintessential pop trait – and Slow Club are quintessentially pop. Ace.