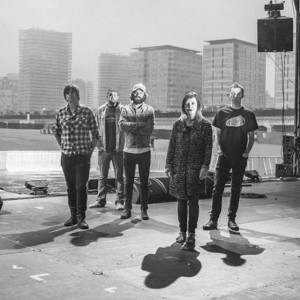 Back in October 2013, in a small low-ceilinged room under the main hall of London’s folk hub Cecil Sharp House, there was the merest inkling that a Slowdive reunion might happen. The band’s co-founder Neil Halstead, whose solo gig this was, asked a guest to join him on stage – and up stepped fellow co-founder Rachel Goswell. They duetted on Alison and Sarah, two Slowdive favourites not heard from their lips since the band morphed from Slowdive’s shoegaze into Mojave 3‘s alt.country.

Soon after, a reunion proper was announced to much excitement and fanfare, and two London gigs happened, at Village Underground and Hoxton Square Bar + Kitchen, with a slew of festival appearances across Europe following. After this burst of welcome stretching-of-legs activity, these two dates at the Forum felt like something of a homecoming, after 20 years away.

Halstead’s three solo albums and his work with Mojave 3 mean the bulk of his career’s material consists of songs composed and performed on acoustic guitar. For Slowdive, of course, his guitar in the main is electric and, tonight, it makes glorious, room-filling sounds that are more fitting for stargazing than for musing on one’s shoes. Bearded and in a plain shirt, he stands on the right of the stage, with Goswell sparkling centre left, the two of them seemingly emphasising that this is a band, a collaboration and a meeting of minds. Nick Chaplin (bass), Christian Savill (guitar) and Simon Scott (drums) fill out the stage around them.

They begin with Slowdive, which prepares the ground for the sonic power to come. Halstead and Goswell’s sweetly entwined boy-girl harmonics float together above the squalling guitar to mesmerising and strikingly beautiful effect. Catch The Breeze and Blue Skied And Clear underline that Halstead’s later more pronounced surf references were always present in his music, and here it’s possible to close eyes and see rolling waves tunnel in slo-mo overhead, the seawater glinting in the sunshine. It feels close to perfect.

When The Sun Hits – lifted from second album Souvlaki and surely one of Slowdive’s greatest moments – is tonight dedicated to Nick Talbot, better known as Gravenhurst, who passed away at the shockingly young age of 37 last month. Halstead supported Talbot at an intimate gig at St Pancras Old Church a couple of years back, returning a favour when the bill was reversed at St Giles-in-the-fields in 2009.  Their mutual respect and admiration was evident. Halstead’s words in tribute were matter-of-fact; an acknowledgement, a farewell to a kindred spirit. The music did the talking.

Visuals adorning the back of the stage and immersive lights that further dramatised the songs and at times hid the band members combined to allow the music to carry the room away from the band-audience dynamic and welcome the manifestation of one’s own little bubbleworld. Eyes open or closed, this music, this performance, lifted, transcended the surroundings, the place, the time. Slowdive songs are revealed to be timeless pleasures, cut loose from any scene and full of their own life.

Later there was a reminder that Slowdive are far from one trick ponies when it comes to texture and dynamics. Dagger all but silences the crowd with its minor chord acoustic stoner strums – it’s maybe the closest they got to sharing an atmosphere with world-removed contemporaries Nirvana – and those so effectively subtle vocal harmonics. Alison is met by whoops of recognition, and of course sounds very different from the acoustic rendition at Cecil Sharp House. The woozier, trippy moments – chiefly from third album Pygmalion – are beefed up with beats and bass for the live setting, yet all remain recognisable from the recordings and none are worse off for their makeovers. The disorientating guitar loop of Rutti, played during the encore, worked especially well with anchoring drums.

“See you next year,” said Halstead at the set’s close, and surely everyone in the room took this to mean Slowdive would tour in 2015. Perhaps they’ll find set space for Miranda, or Primal, then? In the meantime the band have booked time to work on new material; presenting the possibility that a new album will emerge and mean this most welcome if unlikely reunion story does what so few reunions do, and picks up the pieces where they’ve lain untouched for so long.