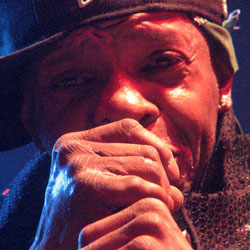 This is man not waving but drowning.

The band, nominally The Family Stone, gamely try to keep up appearances. But the 64-year old dressed in a style that can only be described as pimp-my-Merlin moves with the arthritic discomfort of a man 20 years his senior..

Microphone jammed against his rictus-grin, the man intones words that once hinted at a code for survival, words that now don’t seem nearly enough: ‘Time is passin’ / I grow older things are happening fast / All I have to hold onto is a simple song at last.

This is Sly Stone. And I, like many others here can scarcely believe I’m in the same room.

Swallowed whole, Sly Stone’s output from the early seventies hints at the decline to come. Yet There’s A Riot Goin’ On and Fresh also unleashed new innovations, finely tuned or de-tuned by worthy or not-so-worthy successors.

For posterity’s sake, Sly achieved a kind of pyrrhic victory, artistic triumph weighed against the cost of his psychedelic soul.

One of the principal signatory’s of Sly’s downfall was his superstar distancing from personal responsibility. Amongst the disillusionment, paranioia and confusion, Sly as good as gave up turning up on time for gigs, or even turning up at all.

So as the clock strikes 11, the so-called Family Stone has run through a cabaret-style In Time. Dance To The Music follows enlivened by the throaty roar of Cynthia Robinson’s ‘ALLTHE SQUARES GO HOME!’.

Squares or otherwise, an ungainly shape that must belong to Sylvester Stewart shuffles painfully onstage. The smile, the shoulders haunched, this is part-man, part-mannequin.

The band, looking as relieved as OJ Simpson, play If You Want Me To Stay, the sinewy bass-line coming up for air just as the hi-hat cues in Sly, cadaverous at the keyboard.

With two mikes at his face, Sly elects to sing this not-so-simple song into the one that doesn’t work. With his face once permanently masked by busy ‘fro, fuzzball sidechops and foppish fedora, its hard to register that this man in Ray Charles shades and Norman Wisdom-gone-grime cap really is Sly.

As if by rehearsal, Sly announces that he ‘needs to piss’. The band gamely try to continue, ignoring the increasing unrest of those that shelled out the best part of 40.

Maybe the money is for the enduring mystery. Is it possible to fill-up 25 years of virtual nothingness by getting off your neck with George Clinton and paying off your IRS debts?

The money might also be for hearing Sly battle through the travails of Thank You Falletinme Be Mice Elf Agin. Which unfortunately he doesn’t. Although we are priveleged to hear You’re The One, the proto-disco funk classic Sly composed for Little Sister, and said to be a firm favourite at David Mancuso’s Loft club.

By the time Sly shuffles back on stage, after breaking some world record for a bog-break, somehow Gil Scott-Heron‘s Pieces Of A Man comes to mind. All we see are fragments, jagged pieces of a man, and also something of a broken promise.

Unbelievably this juddering figure jumps into the photographer’s pit, brandishing a double peace-sign. The pieces of yesterday are there for all to see, but they no longer fit.

There is no great, spontaneous musical moment. No viscerally generated glimpse into what was, and might, just for a second, be again. The overall effect is a ghoulish re-animation, a sad, disappointing last and final rites on an artist that simultaneously burnt out and faded away. The only riot goin’ on was the demand for the ticket money back.

In case you’re wondering, one star is for Sly’s little sister, the long-suffering Vanetta, and the even-longer suffering, and still impossibly vital, Cynthia Robinson. And just one more star for the the saint-like patience of the musicians.

Aside from that, I hear some other group are calling themselves the broken family band. Unofficially at least, I believe that title should have taken by another group some time ago.

Hmmm… must be nearly 40 years now…

Sly and the Family Stone MP3s or CDs

Sly and the Family Stone on Spotify