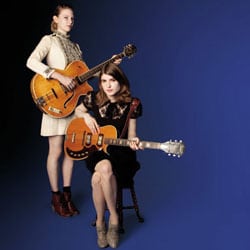 “I’m a little nervous tonight,” Katherine Blamire shares with the 50-odd souls crowded in to watch her and Smoke Fairies associate Jessica Davies.

“I walked into the men’s toilets before coming on stage. How does anyone use them? There’s no toilet paper, locks or cubicles…! It really is most concerning,” she continues with a momentary look of distress. The crowd laughs and the somewhat reserved almost unapproachable persona the West Sussex duo initially entered the stage with instantly dissipates.

The perfect ice-breaker, it’s fair to say the audience is well and truly onside and poised for what promises to be a tight set filled with tracks from their eagerly anticipated debut album, Through Low Light & Trees.

Dressed in earthy shades of greens and browns, the girls appear to have loaned their guitars from giants for the night, making them appear more elf-like than fairies. Despite the visually dwarfing effect of their instruments and indeed their accompanying band, their vocals prove anything but, as together they deliver a captivating set which marries alternative folk-rock with traditional American blues, giving them an at times haunting sound.

Early influences of 1970s folk-rock legends Crosby, Stills, Nash & Young resonate in tracks such as Devil In My Mind and Living With Ghosts, while the slide guitar and repetition in Strange Room Rising and Frozen Heart are typically blues, despite the traditional folk vocals and rising harmonies. Gas Town is as obvious a hit with the Camden crowd as it was with White Stripes/Raconteurs/Dead Weather brain Jack White, who last year approached the girls to perform and produce it under his Nashville record label, Third Man.

Throughout the performance there’s little doubt as to the bond and mutual respect between the girls, who first met and started playing together at school in Chichester and later flipped burgers for pocket money. The Smoke Fairies is a fictitious name the girls use to describe the mist that appears between the hedgerow of the winding country lanes of Sussex of a night, and captures perfectly the restless and wistful imagination evident in all of their songs.

The lyrics throughout draw on their recent travels to New Orleans, Vancouver and finally London with feelings of isolation, separation and borderline desolation being commonplace throughout. It’s these underlining themes that make the two so addictively compelling to listen to, but ever so slightly uncomfortable at times to watch live. What the Smoke Fairies lack in charisma and live stage presence, they more than make up in slick performance, musical composition and flawless delivery.