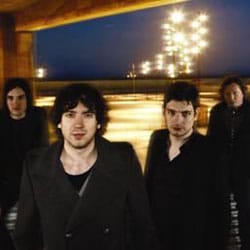 Marking the release of A Hundred Million Suns, their fifth album, Snow Patrol played their fourth capital city gig in two days following on from Belfast, Dublin and Edinburgh (Wales will have to live without them for now).

Here in London, the 800 seater Bloomsbury Theatre provided a smaller than usual setting for a band with stadium leanings.

Kicking off with Set Down Your Glass and If There’s A Rocket Tie Me To It, the band introduced some of the new material immediately, choosing two of the better tracks off the album. The former, in particular, was a great start to the gig with our frontman, Gary Lightbody, playing with just a guitar and a piano as accompaniment to this delicate, lilting ballad, before the latter song brought in their rocky, anthemic side.

However, bearing in mind this was a gig to showcase the new album, it was a surprise to hear so many of the old singles as well. The band avoided that common pitfall of theatre gigs – an unresponsive crowd, and had them on their feet with the third song, Chocolate, where they stayed for most of the remainder.

In fact, while he might appear to be an intense, dreary character on record, Lightbody turned out to be a sprightly and naturally humorous frontman in person, delivering one-liners and joking away with the audience members.

The best performances of the new songs came in the form of The Golden Floor, with its tribal beats providing a departure from the standard Snow Patrol sound, and Crack The Shutters with its strong, manipulative melody – surely another global smash in the making.

With Lightbody now in his thirties, and a career getting bigger with every record released so far, he and his band have become a confident live act. There’s no doubt that anyone coming to this gig who was already a Snow Patrol fan would find little to complain about. The more useful question is whether someone previously unconvinced by their studio output would find them more enjoyable in this live setting.

The answer is that they probably would. Lightbody’s voice was superb throughout – well-rounded, powerful and accurate. Crowd favourites Chasing Cars, Run and Open Your Eyes were performed flawlessly, and they managed to cram their stadium sound into a tiny venue without difficulty. Unfortunately not all their songs are as strong as those and Snow Patrol’s weakness comes in the shape of the instantly forgettable songs that crop up too commonly.

Some might say they were too loud for the venue, or that they could have come back for an encore, but all in all it marked a good start for the next chapter in the career of Snow Patrol.