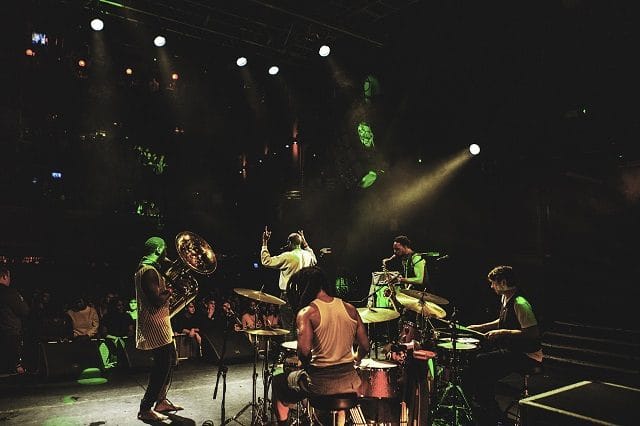 As we edge towards the end of the year Sons Of Kemet find themselves at the tail end of a pretty great one for their band. Not only did they release one of the records of 2018, but they also received a genuinely deserved Mercury nod in the process. While ultimately – from a list of more than one dubious contender – they didn’t take home the gong, it must have at least opened them up to a wider audience than they might otherwise have enjoyed.

Unsurprisingly, for their headline show at KOKO the mood is jubilant and the building jam-packed. The audience is plainly eager to hear how the band answers white patriarchy and royal and political matriarchy with the irrepressible odes to black women that make up Your Queen Is a Reptile in a live setting. While the record’s quality is not in question, the heat they inject its songs with live takes them to a level that few could predict.

Guest vocalist and poet Joshua Idehen warms up the crowd with positive vibes, and a well-received jab at Theresa May. Sons Of Kemet begin with a low key opening of hushed percussion and unplugged sax noodling from band leader Shabaka Hutchings. The exultant burst that follows, while foreseeable, is nevertheless joyous. The crowd commits to the band’s performance vigorously; bodies shift and sway, bounce and stomp at the behest of Hutchings’ improvisations, Theon Cross’s percussive throbs, and Tom Skinner and Eddie Hick’s double drum play-offs.

KOKO proves a great fit for their music; the burning red paint magnifies its warmth, and the building’s design funnels squashed bodies to the focal point of the stage, intensifying the feverish music that spills forth. And while the crowd surrender to the effortless jazz/dub/funk/hip-hop liquidity of the music, the band are also visually mesmerising.

The charisma of each player is given equal footing with Hutchings’, Skinner and Hick all stepping up for compelling solos. But its perhaps Cross that provides the surprise of the evening. From Ore’s excellent 2017 doom-tuba record Belatedly to Anna Meredith’s front-line use of the instrument, it feels like it’s time for this less celebrated brass to shine. And shine it does at KOKO as Cross plays an extended solo that has the energetic crowd transfixed with deeply textured bass rumblings.

For most of the evening, music takes precedence over chat, but Hutchings does approach the mic at one point to reiterate the themes of their latest record. He explains the aim is to expose the myths that have been used to oppress, from ruling by birthright to the idea that somehow wealth dictates intelligence. Still, the message was most potent in the music, because what this band can articulate through largely instrumental music is pretty breathtaking. The deeply thoughtful basis from which this album sprung is bolstered by an intuitive approach to performance, not to mention a great deal of passion.

In an evening that felt rightly celebratory and optimistic Sons Of Kemet managed hypnotic wide-eyed wonder while also initiating a warmly inclusive performance that was decisively immediate.