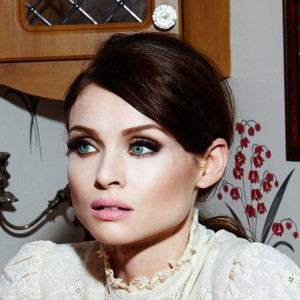 “Wanderlust means an impulse to travel. So it’s kind of funny that I’m launching the album about 10 minutes from my home,” laughs Sophie Ellis-Bextor, at the launch of her fifth album. Luckily, 10 minutes from home for her means west London’s Bush Hall, in all its red velvety, chandelier splendour. The perfect venue for a highly polished pop princess.

It’s not just the place that’s homely; she’s brought the musicians who worked on her latest album to play tonight, including husband and member of The Feeling Richard Jones on bass, and co-writer and producer Ed Harcourt on piano. It was Harcourt who steered and crafted Wanderlust into something quite different to the ice-cool disco she’s best known for. How would she describe the new record? “The soundtrack to an eastern European ’70s film,” she reckons. In reality that equals dramatic popscapes that nods towards musical theatre.

The assembled crowd – a mixture of avid fans shaking their thing and cool as cucumber guestlisters – were putty in her hands. From the opening strings of Birth Of An Empire, to album highlights Runaway Dreamer and 13 Little Dolls, they were on side. She’s refreshingly proud of her roots, even the naff bits, and is at pains to assure people that her love for disco remains, hinting that this diversion is a temporary thing. She makes light of her recent prime time appearance on Strictly Come Dancing, threatening to do a solo waltz to Love Is A Camera (sadly this amounts to a half-hearted sway) and giggling that the sparkly bracelets she’s wearing “fell into her handbag” during filming.

It’s a special evening, in no small way thanks to Harcourt’s masterful keys and her light, grateful chit chat. The change in direction – positioning her halfway between her teenage indie days with theaudience and the dancefloor fillers she’s now famous for – is intriguing, but judging by how happy she seems tonight, it couldn’t have come at a better time. Now 34 years old, she’s scratching an itch that only an album like this could have soothed. “There are some things that you can’t really talk about in dance music,” she explains, before listing some examples; “trips to Eastern Europe, fairytales, Roald Dahl’s short stories, Twin Peaks….”

The change in themes and sound isn’t the only difference with this record. It was, she proudly reveals, entirely self-funded and released on her own label. But no matter – despite moments of self deprecation and endearing nerves, Sophie seems quietly confident. And why not; released the day before this gig, Wanderlust was already sitting happily in the midweek Top 10.

But there’s something not quite right. The songs are pleasant enough, and there are some real earworms hidden in the album, but for an artist releasing her fifth album, changing her sound significantly, and working with an artist as prolific and reliable as Harcourt, the songs aren’t quite up to scratch and, if it weren’t for her stunning, glacial vocals, they’d have washed over without leaving a trace.

It’s a point made all the more glaring with her encore; a greatest hits collection of Heartbreak; a medley of Get Over You, If This Ain’t Love and Bring It Back; and Murder On The Dancefloor. She dazzles; a curious ice queen/glittering faraway creature. She parties with the crowd, rather than before them. A final, perfectly judged performance of Interlude, perched atop the grand piano played by Harcourt at the back of the room, sends the crowd on its way with the refrain of “I’m heading home tonight”. Which in many ways is exactly what she did this evening.