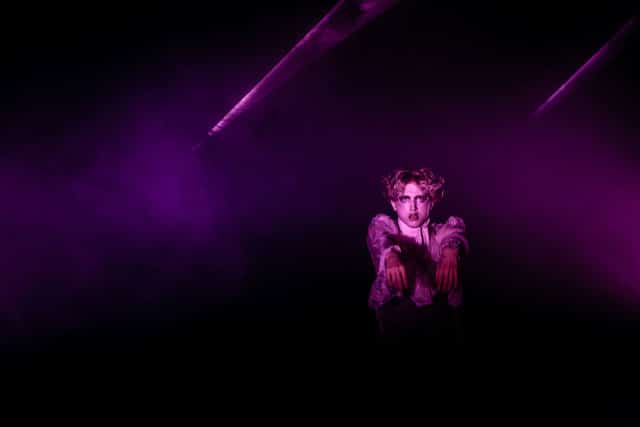 Introduced on stage by Meltdown curator Nile Rodgers as one of his favourite producers, whose music he called “didactic” and “primal”, SOPHIE confirmed with this one-off show what a headline festival performance by a producer might look like. Tucked away to one side of the stage behind a dimly lit podium, little more than her silhouetted hair and a pearl choker could be seen as she operated a laptop and – possibly – other electronics. She was deliberately not the focus of the evening for, as she’d tweeted the day before, we were to watch an hour-long performance by dancer Easton Blake Payne, this set to SOPHIE’s darkly ambient mood music.

Casual fans of early tracks such as MSMSMSM, Lemonade, Bipp and Vyzee, or more recent recruits appreciating the breadth of vision evident on debut album proper Oil Of Every Pearl’s Un-Insides, might well have wondered whether this show was by the same artist, one whose pop chops already include work with Madonna, Let’s Eat Grandma and Charli XCX. But it swiftly became clear that this work was less about entertainment than a birth, or rebirth, and from a decidedly personal point of view. 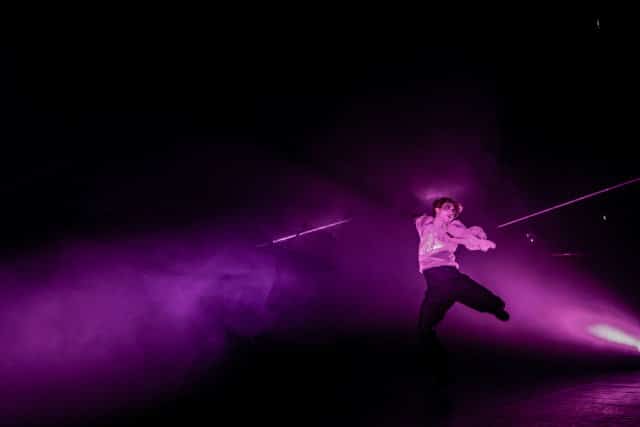 As the legend TRANS NATION flashed up above the stage and deep, muffled bassy synth sounds reverberated around the room, Payne emerged through sheets tied to wires that looked like life-size horizontal bandages, and began to spasm and lurch around the stage in the first of three segments of the show, entitled ‘OUTSIDE OF TIME’ (SOPHIE does like her capitals). At once intensely vulnerable and hauntingly striking, their frilly white shirt and post-cry make-up suggested the reanimated corpse of Lestat being urged back into the land of the living, possibly against its will, and underlining the timelessness of life itself. Impressive strobe lasers offered colour around the blackness, but with no-one else to interact with on the vast stage, perhaps they were also preparing for loneliness as their lived life experience.

The second part, ‘AROUND 600 MILLION YEARS AGO’, took us by means of supra-stage visuals into the deepest, darkest ocean, where neon squid and assorted other fantastic underwater creatures shimmer by, vying with Payne for attention. The point is not lost that they are solitary, queer looking things, going about their business since time immemorial. Chasm-deep synth recalled the album track Pretending – was it? – as a sense of deep immersion set in. 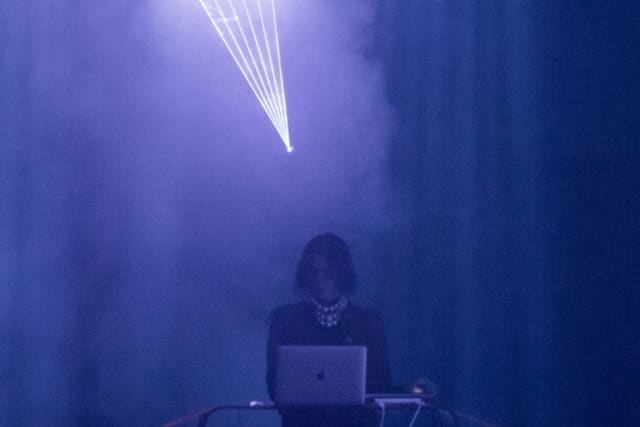 The final section ‘THE PRESENT DAY’ rearranged the bandage-sheets and ramped up the strobes into one memorable scene in which Payne’s frantic jerking motions, equal parts puppet on a string and electric shock victim, transcended a dancer on a stage and became a kind of live action animation. As perplexing as it was mesmerising, it suggested a chaotic, fast-happening and even violent present, in contrast to the endlessness that had gone before. As the most striking visual moment of the show, it felt as though a larger statement was being made.

If we were in any doubt as to what this singular experimental performance was ultimately about, SOPHIE’s thanking of curator Rodgers and subsequent firing up of his Diana Ross collaboration I’m Coming Out as her exit music not only at last gave the room the dance it had wanted for, but it also made the point clearly.