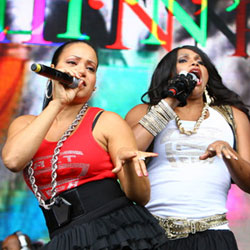 Whilst Saturday’s line-up sat on the more commercial side of house and trance, Sunday is less Armin Van Buuren and more Armand Van Helden, with a bigger emphasis on techno, electro, dubstep and… Salt-N-Pepa (more of which later).

Entering the site we find Kissy Sell Out on the main stage belting out some squelchy sounding electro. We decide it’s prudent to hunt for the Boys Noize tent and find about 20 people pulling random shapes to Berlin’s Housemeister. Despite the embarrassing turnout Housemeister serves up an admirable mish mash of electro which deserved bigger appreciation.

Which is what we find in abundance in the Carl Cox arena for Dubfire‘s early afternoon set. Warped animations loop on the high def screens behind Ali Shirazinia as his brand of big room techno sweeps the floor to much approval in the swelling tent.

Angling for the main stage en route to Salt-N-Pepa a monsoon materializes above south London, causing everyone outside to dash for cover. The nearest place we can find is Together’s urban-themed arena where Jack Beats are blasting out their fidgety party-perfect mixes.

Fortunately the main stage was running late as the showers died down 20 minutes later, meaning Salt-N-Pepa’s return wasn’t to an empty mud sodden field. This latest of several live reunions over the last decade didn’t include Spinderlla, but it was nonetheless nostalgic as retro ’80s TV animations and b-boy dance routines backed the likes of Beauty And The Beat.

The worst dressed man in london (grey Adidas tracksuit with red stripes and matching bottoms, black trainers, black cap, spectacles) is hauled onstage when Pepa demands a “real man” for What A Man. A sweet medley featuring the best moments of Kool And The Gang, Run DMC, House Of Pain, Beyonc and even Nirvana and Guns N’ Roses soon followed before the unfaltering Push It brought down the curtain on a resounding return.

By this time the sun has decided to show up again. Skream & Benga had the Together arena expectedly rammed, but their usually reliable dubstep wasn’t striking the right chords. Of much more interest was an inebriated skimpily clad female member of the audience covered in mud and gyrating outside the tent.

After the novelty wore off we plodded back across to the Boys Noize tent to find Switch in a pre-Carnival warm up for his Major Lazer set on the west side of town tomorrow. The PA had noticeably been turned down and it was always going to be a losing battle for the producer extraordinaire, who soldiered on to a mass of people willing the tent to feel like the street party going on in Ladbroke Grove.

A-Trak suffered a similar fate, meaning even his virtuoso scratching was lost in a hail of loud chatter. A change of tack was needed to ensure we could hear Erol Alkan who was next up, so we took position near the front speaker stacks.

That’s more like it. With the sound now at a near acceptable level, Erol’s disco-electro set delivers with the suitable devastation we’ve come to revel in. In the breaks you still hear chants of “Turn it up! Turn it up! Turn it up!” prompting Erol to protest: “I never usually get behind the mic, but for fuck sake turn it up!”

No such problems are to be found for Carl Cox who is across the common bucketing a sizeable crowd in house and techno. The sun slowly drifting to set on our backs adds to the scene divinely. Adam Beyer followed up with hypnotic animations and dark techno, as the horizon outside the tent signalled the turn of night.

Chipping back over to the main stage, a pause is needed to admire Andy C steam-rolling the Together arena with his dependable brand of drum ‘n’ bass, ensuring the biggest dance off witnessed so far as punters grind the mud into pulp.

Fatboy Slim has the full works at his disposal with a bevy of lasers, projections and sparklers in his armoury for his headline slot. But beneath all the showmanship, there remains a DJ who knows his stuff and the likes of Fake Blood are dropped.

A medley of hits ties down a solid set which had the whole mass of attendees converged on the main stage for a final hurrah. Rockefeller Skank, blended with the Rolling Stones‘ Satisfaction, summed up the mood perfectly, for an afternoon which had it all.