by Matt Cotsell
published: 25 May 2018 in Live Music Reviews
Tweet 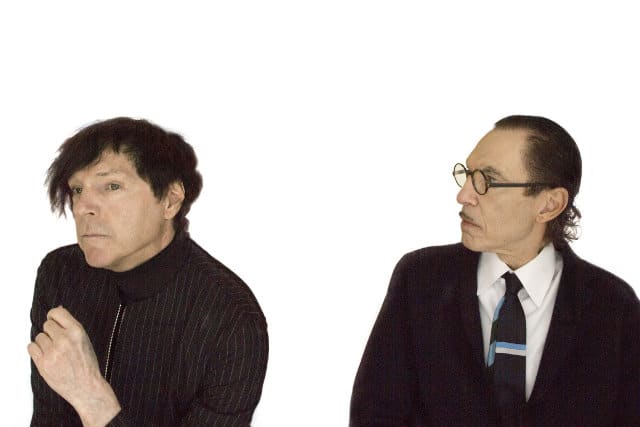 It’s an hour before Sparks are even meant to hit the stage and from the balcony a mist can be seen swirling around the hall. Could it be the output of a smoke machine? No, it’s steam rising from the swarming, boiling throng below.

Suddenly the brothers Mael are in the house, and already the energy is at 200%. They’re resplendent in matching pink outfits, and Russell is prowling the stage to snarky recent single What The Hell Is It This Time? Ron is, of course, his usual stoic self, centre stage at the keyboard, giving us the classic good cop-bad cop combo we’ve come to love. We sing along joyously to every word and thunder our appreciation when the song ends.

The familiar Beatles-y piped key intro of Hasta Mañana Monsieur begins and we’re transported back to 1974. Russell throws his maracas into the crowd and we become children again, bouncing on the spot, before they hurtle into last year’s discordant ballad Unaware and we breathe again, marveling at lyrics that reference Taylor Swift and Nike shoes. The Maels are here mirrors, reflecting popular culture back at us.

Now we get a double whammy of Propaganda and At Home At Work At Play and both are punchy, relentless and note perfect. Once more the crowd and the band are gasping for air. The lights dim and we get a mini laser show, as we exhale. Russell relaxes a while against the drum kit, bracing himself for what’s to come. It’s Tryouts For The Human Race and live, the track shifts from squelchy cosmic disco into a New Order-esque new wave masterpiece.

The pace is non-stop but, as quickly as it starts, it’s over and we get the welcome comedown of Probably Nothing and then Missionary Position. The latter starts with the lines “It’s a little retro and a bit passé, but you know you make her feel A-OK,” and is meant to be a battle cry for sticking to what is ‘tried and true’, but tonight we’re getting a musical Kama Sutra and it might be time for a cigarette.

Apparently that will have to wait as they’re playing Hippopotamus and the place has erupted again. How are these pensioners doing this? The next three tracks are probably intended as a palette cleanser, but we still lap it up eagerly. We get B.C., a hilarious I Wish You Were Fun and disarming The Rhythm Thief. The momentum returns for Edith Piaf (Said it Better Than Me) and dips, thankfully, for golden oldie Never Turn Your Back on Mother Earth.

Russell is singing the first verse and chorus of My Way. Tears are flowing everywhere you look. And then it happens; 2,000 people feel the hairs on their arms and necks tingle as Ron plays the opening of No 1 Song In Heaven. Will he dance for us? He will – of course – and we love him like never before. And of course, it segues into a divine This Town Ain’t Big Enough For The Both Of Us, followed by an anthemic My Baby’s Taking Me Home.

They take their bows and exit the stage, but we’re not having it. We stomp our feet and cry out their names. It works and we’re hoarse but exhilarated by an encore of Change, Amateur Hour and finally Suburban Homeboy. It ends and the brothers stay for a while to thank the audience. It’s not wild ego that makes them linger and listen to the applause, but thankfulness and wonder. They tell us about their fondness and gratitude for the city, and we reciprocate the adoration. They played 21 songs and could have played 30 or 40 more. For a brief couple of hours, we are all ecstatic to live in a Mael-dominated world again.