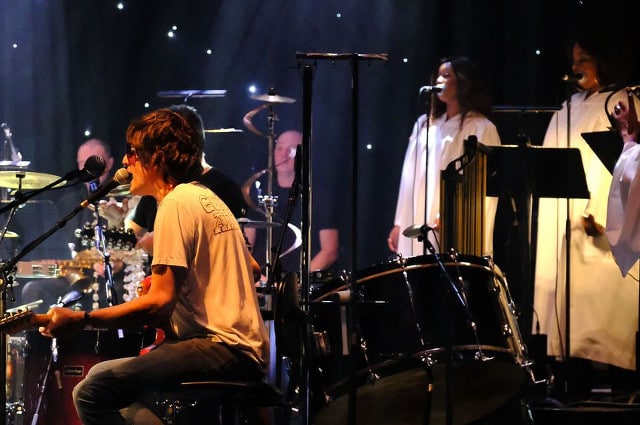 Spiritualized perform Ladies and Gentlemen We Are Floating In Space. Pic: Mark Allan/Barbican

The years since the release of Ladies And Gentlemen We Are Floating In Space have yielded albums of gradually diminishing returns for Spiritualized, various health problems for frontman Jason Pierce and a general lowering in their/his critical standing. The album is arguably still his only real experience of commercial success and undoubtedly the work he’s received most critical acclaim for (even if a strong case can be made for Spiritualized’s debut album Lazer Guided Melodies actually being a superior album).

It’s no real surprise therefore that Pierce still holds the album dear and seems reluctant to fully consign it to the past. The album was played in full at shows at the Barbican back in 2009 and, as the 20th anniversary of the album approaches, Pierce seemingly couldn’t resist arranging another pair of shows at the same venue (albeit with a larger orchestra and choir this time around).

What is immediately apparent is that it is still a stark, open meditation on the themes of loss, separation, drug dependency and the healing, redemptive power of music (although by the end it’s possible to also conclude that it holds up better from a musical rather than lyrical perspective).

The opening title track quickly shows the important, elevated role the choir will have tonight. Their vocals project a cleaner, more amplified gospel feel on to the track. It’s still an engulfing opener and Pierce’s voice captures the same sense of fragility but it feels a little removed from the heavy tranquiliser found on record. Thoughts like this are quickly swept away by the towering, imposing might of Come Together howeer.

It emphatically razes what comes before it, sounding vast and unequivocal and also reaffirms that they are at their best when they are at their loudest. It is followed by the mathematical precision and beamed-in guitars of I Think I’m In Love. These qualities and Pierce’s detailed, perfectionist approach make the fact that he then proceeds to forget some of the lyrics even more odd and surprising. The choir pull through however and help salvage the song.

It is some of the lesser played songs that prove the most musically interesting. The erupting free-jazz tinted passages of All Of My Thoughts contrast with the peak catharsis of Stay With Me, during which the twinkling stars of the stage backdrop seem to exhale heavy, emotion-saturated sighs. The frenzied charge of Electricity is proved to still be one of their live highlights before Home Of The Brave ushers in the esoteric centre of the album, with The Individual taking it further with its significant dark ambient presence.

Broken Heart is unapologetically downcast and sorrowful but tonight the orchestra shines a light on it, and combined with the inherent positivity of the choir helps lift the song above pure pathos. The jagged, dark landscapes of No God, Only Religion serve as a reminder of how well sequenced and balanced the album is – light followed by shade, stillness followed by volatility.

Cool Waves meanwhile offers aural balm of the highest order, arguably still the most beautiful and perfectly realised moment on the album (even if tonight the respective vocals of Pierce and the choir don’t sync as seamlessly and powerfully as they might). Cop Shoot Cop may also be slightly cleaner than previous performances (long gone are the strobe-blasted, sensory-overload experiences of yesteryear) but it’s still venomously loud and the central bluesy riff still implodes magnificently.

They return for a short encore consisting of the cinematic Out Of Sight, replete with glorious David Axelrod-style brass before Oh Happy Day provides a suitably celebratory finale. They’ve never matched Ladies And Gentlemen We Are Floating In Space since, but tonight’s show was a clear reminder of its enduring power and appeal.