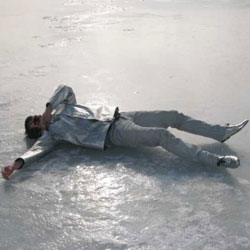 Taking an album that clocks in at just under 70 minutes and turning itinto a full-length concert is a big ask. But this evening J Spacemanand his associates managed to do just that, performing their lauded 1997 release Ladies And Gentlemen We Are Floating In Space in its entirety.

When it was released, the album received many awards and was the subject of legal wranglings with theestate of Elvis Presley, as a result of the title track havingincorporated the lyrics and melody from Presley’s track Can’t HelpFalling in Love. As a result, an alternative version of this track hadto be released on subsequent pressings.

Thankfully, when playing live Spiritualized perform it as originally intended- which works very well indeed, particularly with a choir singing therefrain and merrily sashaying throughout the evening. They weregreat fun to watch, particularly during various freakouts thatoccurred.

One male chorister really got into the zone, and proved to beparticularly adept at shaking his groove thang. At full pelt, they werea force to be reckoned with – which brought to mind the Edwin HawkinsSingers arrangement of Oh Happy Day, which Spiritualized have covered.(It was released as part of the live album Royal Albert Hall October 101997.)

To the left of the choir were the brass section, who came to the foreon Come Together. This was also an indicator of how the songs from thealbum were to be transformed into lengthier versions of themselves, allowing forboth extended discordant extravaganzas (complete with retina-burningstrobe lighting) as well as more contemplative and rather wrenchingversions of tracks like Stay With Me.

The latter had the phrase “Staywith me, baby don’t go”, sung by the choir over and over in a wonderfully rhythmic manner that was almost meditative. Though in a delightfullysurreal way, the guitar riff morphed into something very similar to thedistinctive synths on Berlin‘s Take My Breath Away, as featuredon the soundtrack to Top Gun.

On the issue of lighting, they opted for the Who Wants To Be AMillionaire? school of thought, probably blowing a significant portion of the budget on it. But it was very effective, andthere were several lovely touches, not least having a starry backgroundappear as the album’s opening line floated over the speakers.

Anotherwas during Stay With Me, when several banks of lights were directedtowards the disco ball, flooding the hall with swirling yellow light – simple, but effective. It was a welcome addition, given that MrSpaceman isn’t one for moving about much (or indeed, at all) on stage,preferring to sit with his guitar and trusty Apple laptop nearby.

This being the Royal Festival Hall, the seated crowd mostly limited themselves topolite clapping. Though when things came to a close they did give athoroughly appreciative standing ovation, and did so again after the encore ofOut Of Sight, from the 2001 album Let It Come Down. It was great show and a prelude to their return to London at the Barbican in December.