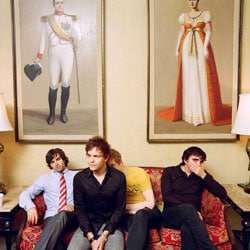 Texan band Spoon have remained under the radar in the UK despite huge success in America. Signed to independent American label Merge, their last two albums have powered their way into the Top 10 over there. Still, tonight with new, seventh album Transference to tout, they’ve managed to sell out mid-sized Camden venue the Electric Ballroom.

Things are kept in the family with support coming from New York’s White Rabbits, a band whose recent album was produced by Spoon’s frontman Britt Daniel. Putting in a good warm-up set, they’re not exactly spectacular, but they impress more in this venue than they did a few weeks earlier at the much smaller Lexington.

Spoon themselves are on superb form with Daniel’s voice astonishing. Powerful and rasping, it plays a big part in their success. The songs keep coming, playing by my count, 22 of them. It’s the familiar crunching riff of Don’t Make Me A Target that begins as the band divide the setlist pretty equally between the new stuff, crowd-pleasing cuts from their 2007 album Ga Ga Ga Ga Ga and older tracks taken from Kill The Moonlight and Gimme Fiction. It’s a selection that gives everyone what they want. They even find time to throw in a striking cover of The Damned‘s Love Song.

The music itself is a little complex to nail descriptively. Much of the time they’re an archetypal American rock and roll band but their conventional core is tempered by a leaning to the experimental. It’s that leaning that makes them interesting while it’s the conventional that makes them enjoyable.

You can listen to The Underdog with its friendly bounce and imagine it could belong to all sorts of successful rock bands of the last 20 years. But that’s only one facet of their identity and those who may have bought their work on the basis of the more radio-friendly material might have been surprised by how experimental they can get. And not just through playing around with sound and in particular Daniel’s voice, although his voice is manipulated throughout, but also through the way they write their songs.

My Mathematical Mind verges on atonal heavy rock but is kept regimented by a disciplined rhythm section. Even on songs with sparse percussion like The Ghost Of You Lingers, a song that makes more sense live than on record, the regularity is kept by a relentless synth line while the drumming is limited to occasional, startling bangs until it starts to resemble gunfire towards the end.

Transference doesn’t bubble over with the immediacy of their previous work. It’s a more subtle piece, and although it might be a matter of not having spent enough time with it, its output doesn’t go down as well as the older stuff. Piano-led songs The Way We Get By and You Got Yr Cherry Bomb feel like old friends, while new songs The Mystery Zone and forthcoming single Written In Reverse don’t have the same impact.

A four song encore ensures that The Underdog with its friendly bounce and I Turn My Camera On with its simple but addictive bassline are played and enjoyed. By the end, it’s been a treat given by a generous band that cements their position as one of the best of their generation, whether this country has noticed them or not.