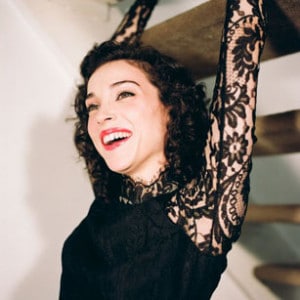 Let me say at the outset that I know nothing about making music. I’ve never tried to write a song, and limited my musical forays to diabolical school concerts which appear to induce that weird, semi trance like state in parents which allows them to sit through hours of total cobblers.

But even if I don’t, I can recognise someone disappearing up their own arse when I see it. And that’s exactly where Annie Clark, who goes by the moniker St Vincent, was going on this night.

Promoting debut album Marry Me, Clark is over in Europe before heading back to the States to support labelmates The National on a nationwide tour – quite a coup. Less of a coup booking the charmless second room of the 229, a bizarre basement club that feels like a hotel bar (are those plastic plants in the corner?). Its fake pine floor and bright pink and blue lighting gave the place a vague, unpleasant ‘office christmas party’ feel.

The haunting, serious St Vincent therefore didn’t fit in at all, and it’s to her credit that she made the place her own. Her voice is undeniably superb, lilting and powerful, and it takes off on tracks Now, Now and Jesus Saves, I Spend.

But it’s the incredible pretence of the other tracks that jar. Decent riffs are mugged by over indulgent experimental solos… nice melodies broken up by sharp bits of clanging and wailing. Two minute interludes – has she finished? Should we clap? As soon as you do, of course, she starts again. By the last song we were locked in stalemate – no-one would clap and she wouldnt say anything. Probably quite amusing for her.

The problem is that she’s trying to do everything herself, and doesn’t have anyone to tell her to rein it in a bit. She drums out a beat then lets the keyboard take over repeating it, before she can get down to playing the guitar and singing. At one point she was doing all three at once. Would it kill her to bring someone else along?

St Vincent has bags of talent, a great voice, and her show has a pleasant, raw feeling about it, like you’re stepping into her bedroom. If she could focus on what she does best then next time she won’t have to play the 229.