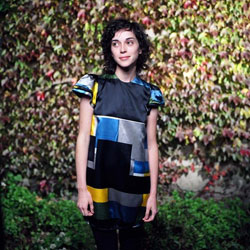 St Vincent’s visit to the UK isn’t exactly your typical rock tour. Sole member Annie Clark is just playing the one gig on these shores, at a tiny London venue, to promote her impressive new album Actor.

But don’t let the big guitar fool you – she isn’t your typical your typical rock musician either. Half an hour before she’s due to be on, she’s quietly reading a book in the bar; and when she takes to the stage she’s as wide-eyed and apprehensive as Harry Potter on his first day at Hogwart’s.

A few seconds into her set, though, and it’s evident that Clark is a hugely talented artist who is very much in control of the room. Using a sequencer for backing and creating her own guitar accompaniment on stage via a looping pedal, she creates a sound which is remarkably textured for a solo performer. But it’s the interplay between the live elements of her set – voice and guitar – which provide the real drama here.

Fans of her recorded output will be familiar with the counterpoint of wistful, bluesy vocals and searing electric guitar; but these extremes are even more strongly polarised in her live show. One moment everything’s serenely sweet – with shimmery, almost Hawaiian-sounding melodies and her voice fed through a distorted blues microphone in the style of Portishead‘s Beth Gibbons.

The next moment the venue’s awash with savage, claustrophobic riffery that brings to mind a rawer, nastier Led Zeppelin. And yet Clark’s angular posture and nervous smiles during and after these bouts of noise manage to offset any sense of menace; and the absence of rock posturing means the heavy riffs are communicated as pure sound rather than aggressive axe-wielding.

Heady stuff, and the audience are driven wild by the experience. Not that they needed much persuading in the first place: almost worshipful, they greet the name of each tune as if it were The Big Single; and Clark’s self-effacing humour between the songs is met with delighted laughter long before the punchline appears.

Actually, there’s a lot of politeness on show tonight. Clark repeatedly tells the crowd how delighted she is to be here – though again, she confounds every rock clich by clearly meaning it – and an encouragement for the audience to clap along culminates in an apology when she realises that she’s left them clapping for so long that their hands might hurt. Yet her sincerity would render any accusations of tweeness unfounded.

All of the highlights of forthcoming album Actor (The Strangers, Actor Out Of Work, Marrow) are covered in the main part of the set, leaving the end free for more downbeat compositions which really showcase the subtlety of Clark’s talent. The Party is stately, fragile blues, full of the passion and vulnerability of Billie Holiday; and encore Paris Is Burning involves some impressively complex guitar playing over a strutting Weimar cabaret rhythm.

“Come sit right here while I slip poison in your ear,” she sings towards the close of Paris Is Burning. And yet the truth couldn’t be further from this: in spite of the intense squalls of noise, St Vincent is all sweetness and light.