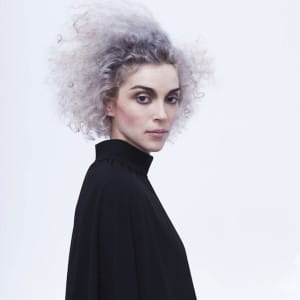 Annie Clark, it seems, learned a lot from her dalliance with David Byrne. Much of their 2012 album, Love This Giant, is audible in her new, self-titled album, and on stage at the Empire there are more than a few similarities with their show at the Roundhouse in August. But tonight was all about her, and will surely go down as the night that St Vincent went from being a quirky outsider to a fully fledged star.

Hypnotic from the very beginning, she was part Madonna, with sultry, tousled hair and a very knowing command of her audience, and part David Bowie, with an otherworldly persona that even the most hardcore of fans can’t tap in to or hope to get to know. She doesn’t play songs; she performs.

She’s on stage for nearly two hours, and closer Your Lips Are Red is as intense and demanding as opener Rattlesnake. The set’s tightly choreographed – with a mix of the sort of jerking robot moves and hand flapping that Byrne revelled in – and she’s completely in charge throughout, slipping only briefly towards the end of the night, when technical difficulties during Northern Lights saw a panicked, more vulnerable side forced out. In so doing it made the rest of the show seem even more remarkable.

If the warped lyrics, choreography and mop of unruly hair weren’t enough, she ups the kooky factor with (minimal) onstage chatter: “We’ve got a lot in common. When you were little you made a hot air balloon out of bed sheets and you were really sad when it didn’t fly. Your favourite word is orgiastic.” the crowd looks on, perplexed but vaguely nodding.

But when the chatter’s over, she gets down to business, and takes things very seriously indeed. She plays guitar with a ferociousness that elates whoops usually reserved for American crowds; it’s fast and hard, with an industrial reverb that defies her falsetto vocal. Extended guitar solos – so often used to pad out sets – are a highlight, and the ending to Marrow feels like a bolt of electricity has been shot through the Empire.

Elsewhere, Cheerleader and Birth In Reverse are almost unsettling, such is there unwavering intensity. But it’s not all re imagined krautrock; new track I Prefer Your Love, sees her lounge across a raised stage, all Hollywood starlet, before rising up, crossing her arms around her chest in a trance-like state, staring vacantly into the crowd, offering up the eerie refrain: “I prefer your love, to Jesus.” With such a confident set – and the ghost of Love This Giant hanging over her – it’s easy to forget what a shift the album St Vincent is. The older songs sound quite startling in their difference; the twisted fairytale of Cruel World is enchanting, but misses the metallic electro fuzz that jolts her around the stage for most of the rest of the set.

Tonight’s show – like the new record – is utterly bonkers and endlessly fascinating. But the important thing is it’s also accessible, and that could be what makes the difference this time around. It’s no longer impossible to imagine St Vincent on a stadium stage.