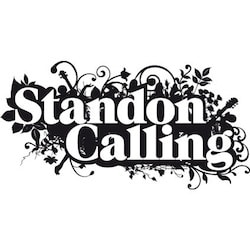 These are tough times for UK festivals, as the organisers of Standon Calling probably know better than most. Its got to be pretty galling when your main headliner pulls out with just two weeks to go, weak ticket sales leaving you literally giving passes away on the days before. And this in a year where the founder was jailed, having met the costs of previous installments through defrauding his employer of hundreds of thousands of pounds. Tough, tough times.

Its hard to dwell too far on them though when, halfway through the first day, youre kneeling in sand with your head bowed towards a rune-covered wall, cowled figures whispering incantations into your ear before leading you through a tunnel to behold a glowing obelisk. Its around that time that reality tends to fade a little, and all that really matters is the return of the Monster-King.

Suffice to say, Standon Calling isnt really like other festivals. Arts and crafts are as much of a focus as the lineup, and both seemingly take a second place to slothery and socialising: banish any foolish notion that people at a music festival might actually strive to watch the music, as most don’t, leaving too many of the acts facing crowds little bigger than the bands. It’s sad: despite the assembly of one of the most interesting bills of any event this summer, it’s by far the swimming pool that draws the greatest audience.

That’s their loss, frankly, as there’s much to love and even more to discover. Errors play a reliably visceral set of synth-tinged post-rock, whilst fellow Glaswegians Dananananakyroyd are thrillingly unhinged, frontmen Calum Gunn and John Baillie Jnr causing a twin headache for security as they flail their way through the crowd.

Back on the main stage Chrome Hoof deliver a polarizing performance, veering between genres with their orchestral experiment. They close their set with the arrival of a giant alien onto the stage, his machinations foiled by the band’s swift efforts removing his brain and casting it into the crowd: somehow, within the context of their sound this makes perfect sense. And hey, at least they’re interesting: current hype-darlings Washed Out may have filled the Twisted Licks tent, but its unlikely that their electronica-to-sell-clothes-by left many with any lasting memories. Perhaps they should have played the Horse Box stage: it’s run by Jack Wills…

Like Animal Collective, Battles have been a slightly frustrating live proposition of late, their sets prone to detaching audiences as much as blowing them away. Tonight, thankfully, they err towards the latter, delivering a taut, lean set of crowd-pleasers – Atlas, as well as teasing snatches of Tonto – mixed with newer fare, from new single My Machines to a storming, caustic Futura, with little of the experiment thats marred some recent shows. It’s only the encore that slips up, nearly 15 minutes of sprawl – ‘we’re just gonna hang out with you guys for a while’ – that only really gains focus right at the close, by which point most people have fled to the rather more straightforward bass shudders of the dance tents.

Saturday, and we awake to the upturn of natural order, tentacled and bloodied beings emerging from their tents, queuing at the bars and spitting toothpaste into the sinks. Today, of course, is dressing-up day, when chasing music takes a back step to smearing paint across your face and affixing cloth to your shoulders and pretending that you’re Mumm-Ra.

Which explains if not excuses the tiny crowds for the afternoon’s acts, starting with The Mummers and their sweet, soothing mid-afternoon main stage set, all swirling melodies and lush orchestral rhythms – a sharp contrast to the brash guitars and choppy indie of Canadians Born Ruffians, exuding energy if not originality over in the Twisted Licks tent.

Saul Williams, meanwhile, is a revelation, his set an entwine of caustic poetry and surprisingly danceable brass-tinged industrial beats. Opening with a spoken word salvo Williams takes possession of the field instantly, his voice both calming and braced with command. It’s these moments, perversely, where Williams is strongest, his words more urgent than any music, more gripping than any song. Still, the songs remain pretty damned good, even if it’s only List Of Demands than most people know: the set is overwhelmingly a showcase for new material from his as-yet-unreleased (in the UK anyhow) Volcanic Sunlight album.

Lamb maintain the high quality, closing the Saturday night main stage with a set heavy upon crowdpleasers but with enough showcasing of recent material to sidestep any question of their relevancy over a decade after their emergence. Gorecki and Gabriel get the largest response, predictably, but the three piece’s performance never really dips, Lou Rhodes’ voice still striking behind Andy Barlow’s grinding – and more brutal than remembered – electronica.

There’s a definite trend in Sunday’s lineup, with almost all of the main stage acts incorporating a strong, appropriately sun-addled and red-blooded brass element into their sound, from The Hempolics and Brassroots through to the day’s headliners. Bafflingly, the afternoon’s dog show draws more interest than both, although an on-form Sound Of Rum quickly drag people back, rapper Kate Tempest’s potent social commentary a fitting counterpoint to the frankly bizarre spectacle of a lot of dressed-up people cheering on a dalmation as it sits by a cone.

Across in the Twisted Licks tent 2.54 play a pleasingly heavy set, female vocals meshed with dirgy guitars and Warpaint atmospherics, whilst Trophy Wife deliver, despite the fairly thin turnout, a spirited, frenetic performance of synth-driven indie.

He may have recorded one of 2010’s best albums but John Grant struggled to get an audience for his Sunday night headlining of the Twisted Licks stage, his earnest singer-songwriter tales a sore fit for a crowd seeking hedonism over introspection. To be honest, tracks names Where Dreams Go To Die will drive anyone away, especially when it’s to see Africa Express close the festival, stepping up admirably to the headlining slot vacated by Spiritualised just two weeks before. The ensemble fill the stage, a whirl of motion as they deliver track after track of high-energy jazz-funk, performers from throughout the day returning to swell the sound further. The stage projections might have been forgettable but the show isn’t, ending Standon Calling’s 2011 edition on a significant high. Here’s hoping it gets to return next year.