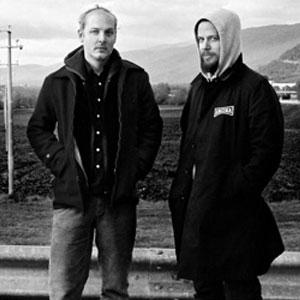 Stars Of The Lid are rarefied experts in creating remarkably loud quiet music. Adam Wiltzie and Brian McBride last released an album under this moniker in 2007 – And Their Refinement Of The Decline – but the duo’s towering influence over the drone/ambient genre was arguably enhanced by Wiltzie’s collaboration with Dustin O’Halloran on last year’s marvellous A Winged Victory For The Sullen project and McBride’s solo ventures into – what else – documentary soundtracking.

St John’s Church in Hackney is a fitting choice for this most cavernous of sounds; the duo have augmented their live show with a nine-piece string section and projections courtesy long-term collaborator Luke Savitsky. Indeed, Savitsky’s light show takes centre stage as the performers are shrouded in a darkness which is only sporadically relieved by a sudden surge of luminescence, everyone hovering in a shimmering equipoise between reverent intimacy and radiant expanse.

This serves to create a wonderful synaesthesia with the ambient sounds the string section gently coax from their instruments while McBride and Wiltzie appear to act altogether within their music, thrusting and driving their guitars through shards of feedback. The opening piece, essentially an overture to the proceedings, is slight in comparison to what follows, a monumental rendition of December Hunting For Vegetarian Fuckface. On record, the 18 minutes swell into a heavenly crescendo; within the non-secular arena, the effect is to swoop in the opposite direction, into the depths of a visual and tonal ferocity which rivalled Swans at their most visceral, Charlemagne Palestine at his most transcendent. The bass frequencies were staggering, ushering in a period of almost agonising euphoria.

Everything the band performed after this felt like a coda in comparison but this was not necessarily a negative aspect. A Meaningful Moment Through A Meaning(less) Process skirted around the edges of the sublime which was followed by Requiem For Dying Mothers in its entirety, where the string section at times appeared to lull itself to sleep only to wake violently at the behest of Wiltzie’s impassioned directions. The band offered up a newer, untitled track which appeared to veer away from the flirtation with impending cacophony in order to adapt a more consistent tone, dispensing with the quiet/loud, joyful/sorrowful dichotomies dictating their previous work.

Of course, it wasn’t all hushed genuflection; Wiltzie proved an adept compere for the evening, recalling previous visits to London over 20 years ago when venue owners refused to let the band project while playing, ensuring the nascent Stars proffered a hasty ‘fuck off’. Tonight, it’s nigh on impossible to imagine the performance minus the projections – the religious paraphernalia takes on a frightening hue when caught in the glare of the scintillating visuals, The Ten Commandments coming to light during the final song – Music For Twin Peaks Episode #30, Part 2 – gave extra weight to what was already a coruscating finale.

Stars Of The Lid may channel the likes of La Monte Young and Phill Niblock in their vanishing point approach to drone but the duo almost exist in a vacuum of their own making. The all-consuming emotion on display at St John’s Church exists in such a communion between placid quietude and epic amplitude that it becomes impossible to hear one without the other, hard as you may try.

Stars Of The Lid MP3s or CDs

Stars Of The Lid on Spotify