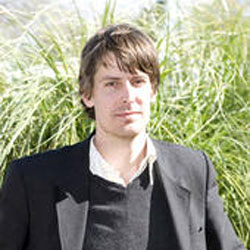 Tonight’s bill provided an interesting contrast – two artists, both having been in highly successful bands (though admittedly, Pavement‘s success was more critical than Blur‘s commercial), stepping out into the solo light with their own line-ups.

But there were a couple of other acts on the bill, hand-picked by compere Stephen Malkmus himself. He introduced the evening with an acoustic rendition of Animal Midnight – during which drummer John Moen bizarrely leapt around the stage like a clumsy builder, hypnotised as a ballerina.

First on was Alternative TV, an ageing London punk band attempting to recapture its rebellious 1977 incarnation, whose political protest songs should have stayed buried in the annals of punk history. Bert Jansch seemed to be an equally odd choice. A highly respected folkster, his solo acoustic set showcased his incredible guitar playing – but it was clear from the audience response that it was Graham Coxon and Malkmus who provided the pulling power for this gig.

Coxon shuffled onstage to rapturous applause but his set, a little like his voice, was sadly lacking in substance. While his songs display a delicate balance of harmonies and intricate guitar playing, his voice is thin and weedy and I wondered, watching him hunched over the microphone, hidden behind his thick-rimmed specs, muttering barely comprehensible mumblings between songs, why he didn’t try and find a frontman with some charisma to justify some of his really quite charming, idiosyncratic songs.

There are very few people in pop who ripen with age, but if ever there was a case of the frontman rising out of the ashes of a highly influential band such as Pavement, then Malkmus has now surely proven his worth. Tonight really did prove that in 99.9 per cent of cases, the frontman of the band is really the only one who can make it on their own. It’s been a few years now since Malkmus ditched his formative band, and with his second album Pig Lib even better than his first, it looks like this move was probably the best move he could have made.

One of the most striking things about seeing Malkmus Pavement-less is quite how good a guitarist he is. Not only that, his cryptic, angular songs of old have been supplanted by a more accessible dimension in his new work. “I wish I lived on this stage – it’s so quiet,” he commented a few songs in, explaining that his family now provide the noise in his life. “Although they bring a lot of joy, too,” he added. Bless. There’s still the desert-dry sense of humour, demonstrated in Vanessa from Queens (“There’s aggression in the air this morning/ Got your ballerina tights around my head/ In a Samurai pose on the bed”) and the experimentation is still evident in the weird time-signatured Water And A Seat. But it’s a more tempered eccentricity which Malkmus displays these days and his songs, rather than posing cryptic puzzles, now tell stories of skewed relationships and childhood memories.

Malkmus and his now-stable band The Jicks motored their way through most of the new album, throwing in a couple from the first, including a somewhat lackadaisical piano-and-vocal version of Jenny And The Ess Dog – including further prancing antics from John Moen.

An extra-long 1% Of One as encore saw the band encourage the audience to have a dance, causing many to abandon their seats and create a mini-moshpit at the front. All very charming, and with Malkmus clearly relishing his new creative lease of life, I left the gig thinking that I had seen a band at the peak of its powers.