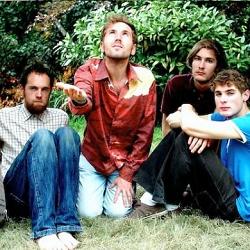 After a year that has seen Oxford folk pop collective Stornoway score a Top 20 album and appear at Glastonbury and on Later… with Jools Holland, they arrived at Brookes campus for what was bound to be a triumphant homecoming.

However not all goes quite to plan. Opening with Cold Harbour Road, it’s immediately apparent that while most of the audience are hardened fans, the sound man hasn’t been paying quite so much attention. Brian Briggs’ voice, always the focal point of their sound, is here compressed and boosted to such a volume that it’s almost impossible to pick out anything else. This is a recurring problem throughout the set, and while it does improve by the time we get to the rolling wurlitzer of Fuel Up and the rollicking Watching Birds, it’s a shame that technical problems should have a part to play on what should be a purely celebratory occasion.

It doesn’t dampen the mood, although despite the rabid cheers and squeals it all feels a bit like band and audience are tiptoeing around each other until I Saw You Blink – and from then on every word is roared back at the band, and each charmingly nervous bit of banter from Briggs is met with the requisite chuckles.

We Are The Battery Human is in all likelihood the route of all the inaccurate Mumford And Sons comparisons, and live it is transformed into a joyous hoe-down as its opening twangs of banjo bring yet further whoops of delight.

The main set closes with a completely acoustic version of The End Of The Movie, the audience managing a really rather impressive quiet, and at last Briggs’ voice is as it should be, its beauty found in the way he reaches for notes. Given the space to breathe and sit among the arrangements, it proves a potent weapon.

A striking, string-heavy On The Rocks is even more expansive than on record and points to where the band may go next, the onomatopoeic cascade of violins and toppling cymbals creating a veritable storm around Briggs’ voice. Inevitably all that is left is Zorbing. Briggs comes in slightly early after an extended brass break and it’s heartening to see that while they may now have branded Hackey Sacks at the merch stand and Zane Lowe appearances under their belt, things aren’t entirely removed from their very first show, given just down the road at the tiny Port Mahon.