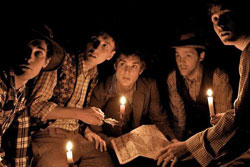 While most unsigned bands might struggle to get people out on a Monday night, tickets for Stornoway’s gig at the ICA sold out over three weeks ahead of the show.

This, along with a flurry of rave reviews, give some hint as to just how good this six-piece indie-folk group from Oxford are.

With sweeping catchy tunes, subtle harmonies and accomplished musicianship the band have enjoyed a successful summer on the festival circuit. Playing an array of instruments including banjos, violins, trumpets and an unexpected sitar, their sound is original and distinct. But it is the lyrical talent of the bands’ unassumingly charismatic singer/songwriter Brian Briggs that really sets Stornoway apart.

Briggs, 29, is not your typical pop-star. He works full time as an ecologist and recently completed his doctorate in ornithology. Chronic shyness meant that Briggs did not perform many of his songs for years, even to his girlfriend. Although he has overcome his shyness, a residual bashfulness together with the candour and occasional vulnerability of his lyrics instantly endear him to his audience.

Sounding a little like a Gaelic Mike Scott from The Waterboys, Briggs’ voice is rich and versatile. His softened vowels and the name of the band suggest that their roots lie in the Hebrides rather than Oxfordshire. With several post-grad letters between them they’ve been dubbed “Britains brainest band”. It’s not a title they’re trying to play down. Indeed it’s not often that you hear a song introduced with the words “This one’s about writing up my PhD thesis”.

Their sound ranges from pastoral-folk-pop to toe-tapping country. Their songs are thought-provoking and life-affirming, evocative and effortlessly poetic. Like Leonard Cohen without the cynicism, the lyrics meander through verses of resonant imagery before stumbling on universal truths then soaring into hum-along choruses.

Zorbing, their first single release, describes the heightened sense of perception experienced in the early stages of falling in love (“Send my body out to work but leave my senses in orbit over South East London”). Fuel Up is an uplifting time-travelling meditation on friendship, loss and love (“Now you’re a passenger to your own heart”). We Are The Battery Human is a protest anthem for Generation X, challenging us to let the scales fall from our eyes and see what really matters in life.

Unusually for a Monday night in central London, scales were falling all around.