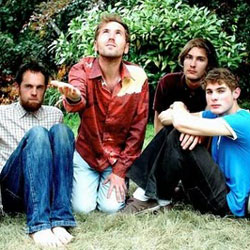 While the tuneful folk-pop of Mumford And Sons and NoahAnd The Whale has broken through emphatically into the mainstreamover the last couple of years, the similar and arguably even moretalented Stornoway remain somewhat under the radar. But after openingon the Pyramid Stage at Glastonbury this year and topping the bill atlast night’s Somerset House Summer Series concert in front of 3,000people, it could well be their time is coming.

With its elegant Georgian architecture bordering a vast courtyard,Somerset House is certainly an impressive venue, especially on a balmyJuly evening when the buildings seem to glow as the sun sets over theThames beyond. In such grand surroundings, Stornoway initially seemeda little overawed. Front man Brian Briggs, sporting an eccentric baggybrown suit, chattered nervously to the crowd before launching intoBoats and Trains, one of the standout tracks from 2010 debut albumBeachcomber’s Windowsill.

It quickly became apparent that Stornoway’s quirky, often delicatesongs are not a great fit for larger outdoor arenas, often soundinguncomfortably overstretched. With the speakers ramped up to the max,Briggs’s yearning tenor and his band mates’ sweet harmonies struggledto make themselves heard above a backing of thumping drums andpiercing electric guitar.

The Oxford quartet started to hit their stride midway through theset with two new compositions that bode well for their next album. Theabsurdly catchy When You Touch Down From Outer Space has one of thosechoruses that lodges irresistibly in the brain from the very firstlisten; in contrast, The Bigger Picture, a delightful acoustic strumperformed by Briggs solo, recalled ’60s singer-songwriters such asDonovan. The purple patch continued with the wistful, liltingFuel Up, a great example of how Stornoway can be quietly anthemicwithout assaulting the eardrums.

Unfortunately, the band’s momentum stalled again when they werejoined by the usually excellent North Sea Radio Orchestra. Abold attempt to flesh out the group’s sound, adding yet more texturesonly served to swamp their subtleties even more. It seemed Stornowayfelt they needed to throw the kitchen sink at the audience to justifytheir new status as a headline act at a major event rather thanfocusing on the more understated charms that got them there in thefirst place, although a rousing encore that included their most movingsong, Long Distance Lullaby, and their best known, the soaring,infectious Zorbing, got the crowd singing along warmly and ensured theevening ended on a positive note.

Briggs’s awkward but endearing banter – ranging from ornithologicalreferences to earnest apologies for delays between songs – included amention of the strawberry museum in Eastleigh, the sleepy Hampshiretown that was the rather more humble location for their gig theprevious evening. One suspects that for all their commercialpotential, Stornoway are more at home on the smaller stage, andalthough their Somerset House performance was occasionallyoutstanding, it’s only in a more intimate setting that you’ll see themat their best.