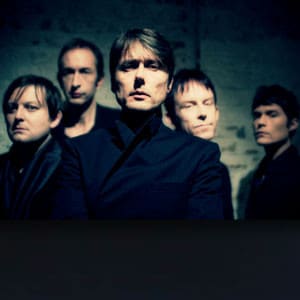 If Suede are about anything, they’ve always been about grandeur. Their lyrics spoke of council estates and bedsit sex, but the music has always been for palaces. Suede make gigantic, graceful, histrionic, bombastic pop music; they always have. As a result few places feel more appropriate to house the next evolution of Suede as Alexandra Palace; grand, opulent, historic, and a bugger to get to. That’s Suede all over.

If Suede are about anything else it’s confidence. ‘Good Suede’ is swaggering Suede, the early spiteful fops of their debut, the ridiculous ambition of the Dog Man Star era, and the bolshy, everything-to-prove ferocity of Coming Up. They only faded when they became complacent. Anyone who saw them at Glastonbury a decade ago, touring an album none of them were that bothered about, will have seen what happens when it goes wrong. They were damp, forgettable. Suede should never be that.

Tonight, though, they are confident, they are grand, they are completely glorious. Confident enough to open the show with the first three tracks of a new album, an opening rendered with such ferocity that you wonder if they’re going to push through Bloodsports start to finish. Suede know their craft better than that though, and it’s another testimony to that confidence – confidence in their catalogue this time – that they follow the newies by putting Animal Nitrate and Metal Mickey, two of the biggest bankers in the set, back to back.

This is a Suede set that is not so much eager to please, as it is eager to show off. “Look,” they’re saying, “look how many amazing songs we have! Look how great our new songs are!” And they have. They are. We have the massive hits (Trash, Film Star), we have b-sides (Killing Of A Flashboy), the album gems (Sleeping Pills, Pantomime Horse), fan favourites (The Drowners, New Generation) and new songs that stand shoulder to shoulder with them.

Of the newies It Starts And Ends With You already feels like an old friend, while Brett Anderson hands the “La la la la la la’s” in Hit Me out to the crowd as enthusiastically as those in The Beautiful Ones. It says everything about the strength of the new material that For The Strangers can sit next to Everything Will Flow and hold its own.

The confidence is there in the men on stage as well. They know this is the best live form they’ve had since their glam punk early days. Matt Osman’s bum wiggles, Brett’s hips sway and microphone cartwheels, Richard pogos and hops. Neil raises an eyebrow once in a while, but that’s what Neil does. Confidence – everyman.

An encore of Saturday Night and New Generation seal the deal. Since the very start of their comeback, three years ago, we’ve known Suede were onto to something special. Tonight they’re as special as they’ve ever been. That confidence is back, and it grows, and grows and grows.