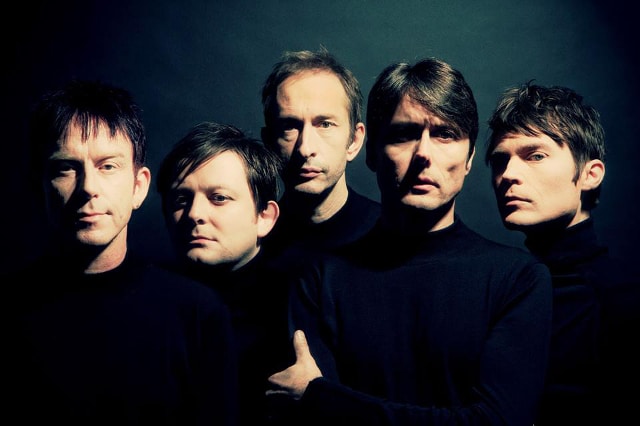 The first half of tonight’s Suede double bill is dedicated to a complete run through of their upcoming album Night Thoughts, with the accompanying film by Roger Sargent projected on a translucent screen in front of the band. It’s an effective idea, half-reminiscent of Brett Anderson’s ancient nemesis Damon Albarn’s early live experiments with Gorillaz, but has its drawbacks. The film has a basic framing story of a young man attempting suicide (rather decoratively, by drowning in the sea), filled in with flashbacks revealing how he gets to that point. Perhaps the new songs deepen these emotional flashpoints, perhaps they don’t. It’s impossible to tell as the songs are too unfamiliar to penetrate through the gauze that separates band from audience (with the exception of the strident, austere and actually rather excellent current single Outsiders).

What we can work out is that they are punchy, with a discernable emotional directness, in keeping with 2013’s comeback Bloodsports. As a first presentation of new musical material, though, it really suffers from the crowd’s greater attention on the visuals. It’s hard to get much sense at this stage of what these songs are meant to contribute to the film, and what the film, with its elliptical structure, is meant to add to the music. Essentially, it’s too early to judge from this presentation how effective the whole package might be and it will need a reassessment after the project’s proper release early next year. Also, quite what a film is intended to do for Suede’s career at this point is unclear, but whatever media attention it gets will at least save the new album from simply appearing as another release on the schedule.

What is undeniably enduring, however, is Suede’s recently reaffirmed archive of hits, culled mostly from the period of their first two albums Suede and Dog Man Star. With their position in the Britpop-years firmament now well and truly established after warmly received comeback shows in 2010, Anderson appears to have no hang-ups now about inhabiting any of the phases of the Suede saga. This is good news for the crowd, who get exactly what they want: a roll out of hits, album tracks and b-sides, received with equal rapture.

Bolshy B-side Killing Of A Flash Boy stomps all over its A-side We Are The Pigs and some of the less explored corners of their 1993 debut are aired, such as the rarely played Breakdown, which proves that virtually anything from the early period can’t now fail at this distance. The boisterousness and fun of their musical adolescence is revisited with gleeful romps through Metal Mickey and Animal Lover: nu-Suede are far too self-conscious and serious now to come up with lyrics as gloriously silly as “does your love only come in a Volvo” or “shake your fake tan through aerosol land” but this is probably for the best for a band (mostly) in their forties. They are wise tonight to largely stay clear of anything more recent, although singles Trash, Film Star and a closing Beautiful Ones from Coming Up are featured, all fizzing reminders of their mid-’90s commercial peak.

Finally, where the previous night’s show featured a genius encore of the three classic tracks from Suede’s first single The Drowners, tonight they take a different tack by playing a trilogy of the more extended and overblown moments from Dog Man Star: The Two Of Us, The Asphalt World and Still Life. It’s another expert move that gives Anderson full rein as spotlight-grabbing diva. In the middle song, he stalks off stage allowing the band to show off themselves, particularly diffident guitar hero Richard Oakes. It seems likely that the lack of recent material isn’t because there aren’t decent moments to explore, but because tonight the crowd deserve to get exactly what they want after standing patiently through the film: a comfort blanket of classic period Suede. When the new songs are released and fully integrated into their live set it will be the time to judge them properly. For now, let’s just say that this was a game of two halves where it was obvious where the goals were being scored.